Farming profits may be under pressure, but it is cash flow that typically presents the greatest challenge, according to accountant and financial planner Old Mill. Farmers should therefore take great care to plan ahead to avoid potential pinch points during the current downturn.

“There is a fundamental difference between reduced profitability and cash flow pressure,” says senior director Mike Butler. “You will only struggle for one reason: Your business will run out of cash. Overdraft facilities will be reached and yet you will still have bills to pay. Certain commitments – like finance payments – need honouring, and some costs, such as feed and veterinary bills, will be more important than others.”

Of course, there is a link between profitability and cash flow, but producing a profit is no guarantee that there will be sufficient cash. “For example, a reasonably profitable farming business that buys an unusually large amount of stock will hold its value in assets rather than cash,” says Mr Butler.

With commodity prices on the floor and many farmers’ Basic Payments being delayed, it’s important to manage profits and focus on cash flow during the most difficult months, he warns. “The saying: ‘Turnover is vanity, profit is sanity and cash is king’ has never been more relevant.”

One area where a lot of businesses are exposing themselves to unnecessary cash pressure is where previous lending arrangements have been structured in such a way that the debt is being repaid too quickly.

“Often farmers have borrowed to invest in the business, say to buy additional land or new buildings, and in many cases they have set themselves what is turning out to be unrealistically short time scales to repay the debt,” says Mr Butler. “The cash flow balance may have been manageable in the best years, but now that businesses are coming under pressure, they simply cannot continue to service those debt repayments.”

A typical example is a business that borrowed £500,000 to buy some land a few years ago, at a time of reasonably strong profits. For that reason the farmer decided that they could repay the debt over a period of 10 years, rather than the more usual 25 years.

Rather than worry about where to find the cash now to pay essential bills, farmers should instead restructure such loans to spread the payments over a longer period, he adds. Based on an interest rate 1.75% over the Bank of England base rate (currently 0.5%), moving from a 10-year loan to 25 years would slash monthly repayments from £4,700 to £2,197.

“Of course, the overall outlay and exposure to potential changes in interest rates will be greater,” says Mr Butler. “However, provided loans are structured with in-built flexibility, borrowers may choose to repay larger amounts when times are good, giving them a buffer to ease off the debt servicing payments if trading conditions return to more challenging levels.”

Provided any such re-arrangements are born out of a need to correct what was probably an inappropriate lend in the first place, banks should have no objection to restructuring loans, he adds. “We urge banks to support their farmer clients, offering competitive lending rates for any new debt and keeping arrangement fees and bank charges to a minimum. We’ve seen a number of banks waive any new loan fees where restructuring takes place, which is encouraging.”

However, it’s important that farmers draw up a cash flow forecast and speak to their bank early to allow time for arrangements to be put into place, says Mr Butler. “Saying nothing and hoping for the best is not a strategy that’s likely to succeed.” 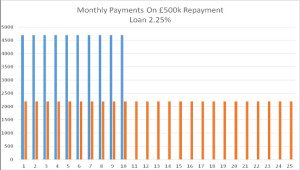 The graph below shows the cumulative cash benefit of extending the loan to 25 years. 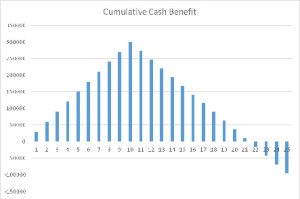 Old Mill accountants and financial planners employ 250 staff in four West Country offices. The Rural Services teams are headed by Andrew Vickery, with offices in Yeovil, Wells, Exeter and Melksham. Looking after over 1,200 farmers they are one of the leading specialist farm accountants, and are happy to help with any financial and tax-related enquiries from the media.

Ideas & innovation make Pig & Poultry Fair a must for farmers