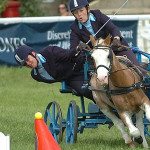 Equine competitors will now have more opportunities to qualify for the Horse of the Year Show and the Cuddy championship at this year’s Royal Bath & West Show.

Schedules for the equine classes at the show – which will be held from 1-4 June – have just been released and include a host of new and exciting competitions. “Showing is an important opportunity for the best horses to compete against one another and the Royal Bath & West Show brings together some of the top horses and competitors in the country,” says Chief Horse Steward Jane Cooper.

The Friday of the show will now host miniature Shetland classes, which will delight children and adults alike. For the first time, the winner will be eligible for the Cuddy supreme in-hand championship, giving them the chance to compete against the best examples of breed and type for this coveted award.

The crowds will be impressed by a new private driving class, which will show off both tradition and elegance. “We are expecting some good entries to this class as it has proven to be a fierce contest amongst competitors elsewhere,” says Miss Cooper.

This year’s show will also introduce a new class for ridden purebred Arabs, which will be a HOYS qualifier. “This class gives Arab enthusiasts the chance to display their horses to the very best of their ability and should attract considerable attention,” adds Miss Cooper. “This year’s show should not be missed; it has something for everyone and promises to be bigger than ever.”