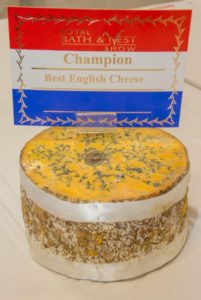 Described as having an exquisite, nutty flavour, shot through with spicy notes, the Blue Shropshire’s delightful taste and creamy texture are matched by its beautiful appearance, with blue veins radiating through a deep-orange body.

Run by the Skailes family in the Vale of Belvoir, the Cropwell Bishop Creamery has been in the family for more than three generations, with every one of their traditionally crafted cheeses proving award-winning over the years.

Taking the reserve champion spot was St Thom – a goats’ cheese by Worcestershire-based Lightwood Cheese. The subtle note of the goats’ milk is said to come through this cheese without detracting from the overall smooth, runny and ripening flavours. An unpasteurised goats brick, St Thom is a lactic cheese made from curd that cools slowly in order to acidify overnight. It is then gently moulded by hand, salted and matured to retain the soft texture.

“We are thrilled to have celebrated the British Cheese Awards’ first year under the ownership of the Royal Bath & West Show,” said Head of Shows Alan Lyons. “We attracted nearly 1000 entries from 54 counties covering the length and breadth of the UK.” The competition also had classes for butter, yoghurt and ice cream, with visitors able to view the judging process and see for themselves exactly what goes into choosing a winning cheese.

“In addition, visitors to the show have been treated to a brand new dedicated food and drink area, showcasing some of the UK’s finest producers – there has been plenty to tickle the taste buds,” he added.