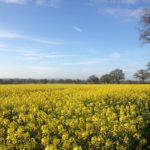 Earliness of maturity is an increasingly important attribute to oilseed rape, enabling farmers to spread the workload, free up storage and cash flow, and tackle blackgrass ahead of drilling wheat. But finding a decent early maturing variety hasn’t been easy – until Advance hit the shelves.British-bred conventional variety Advance matures up to seven days earlier than other varieties, meaning it can be cut, dried and sold before moving onto other crops. Having been bred on Cotswolds brash it is well suited to the British climate, says breeder Mike Pickford. “Being 900 foot above sea level it is a very testing location to put a variety through its paces – if it can excel here it can do well anywhere in the UK.”

According to David Leaper, seed technical specialist at Agrii, the main advantages of drilling an early oilseed rape variety are providing an early entry for winter wheat, enabling farmers to control blackgrass through stale seedbeds. “Oilseed rape also uses different chemistry to cereals so there is the opportunity to prevent resistance building up.” Of course, it uses the same machinery as cereals, and being harvested earlier spreads the workload. “That also helps if you have limited storage – you can sell the oilseed rape early, which frees up cash flow.”

When choosing varieties farmers should consider the oil content as well as the yield, plus the disease profile and stem height. “When commodity prices are low the oil content is an important contributor to rapeseed returns,” says Mr Leaper. “It’s worth an extra £130-£150/ha and is genetically stable so it doesn’t fluctuate like yields might.”

In AHDB candidate trials for the 2014/2015 recommended list, Advance had a gross output 104% of the control, with an oil content of 46.1% – higher than any other variety in Recommended List trials. It scored an eight for lodging resistance and stem stiffness, and being short is easy to harvest. Earliness of flowering was an eight – allowing plenty of time for pod fill – with earliness of maturity at six.

“It’s a very similar maturity to Excalibur, but stiffer and with a higher gross output,” says David Ramdhian from DLF Seeds. “Because it is so early to ripen and the AHDB trials have to wait and harvest all the varieties at the same time, unfortunately it just missed out on full recommendation. Despite this it has a very dedicated following among growers and agronomists, and has a lot to offer on farm.”

Mr Pickford recommends growing Advance as a complementary variety to later alternatives. “Oilseed rape is proven to give the following wheat crop an extra 1t/ha, and there is no other break crop that consistently produces a good gross margin,” he adds. “Advance is also a very farmer-friendly variety; it’s uncomplicated and easy to harvest, you can sow it at a reasonable seed rate and it grows away in the autumn and the spring.”

To spread the oilseed rape harvest, Mr Leaper recommends growing Advance alongside something like Exalte, Expower, Nikita or, further north, Anastasia. “They are good vigorous autumn crops. Hybrids are also quite popular among growers looking for later crops.”

However, farmers who are looking to cut costs by farm saving seed will have to avoid hybrid varieties, he warns. “If you’re farm saving seed choose the cleanest fields and don’t use glyphosate as a desiccant. I’d recommend using a professional seed cleaner to ensure large, vigorous seeds, and use a phosphite and fungicide treatment to get it off to the best possible start.”

The benefits of early maturity

Advance at a glance

Cereals sets its stall out with latest spraying kit