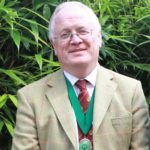 Aberdeenshire’s James Dick is to become the Central Association of Agricultural Valuers’ first ever Scottish President next year, and he hopes to shake up traditional views of the industry.

“I’d like to increase awareness of members’ capabilities both among the general agricultural industry and fellow professionals like solicitors, accountants and bank managers, with whom we work so frequently,” he says. “And I want to encourage new entrants who maybe aren’t from traditional farming backgrounds as they bring a fresh perspective to the industry. It’s so important to ask challenging questions and encourage new approaches.”

Born and brought up in Ayrshire, Mr Dick comes from a non-farming background, although he has worked in the industry ever since he graduated from Aberdeen University with a degree in agriculture, followed by a diploma in farm business organisation and management at the Scottish Agricultural College. “My interest in rural matters stemmed from my mother encouraging me to have a summer job, working on a local farm,” he says. “I’ve never looked back, becoming a Fellow of the CAAV in 1994 when I worked for Hayes McCubbin Macfarlane, and setting up my own business in 2000.”

Now a sole practitioner near Aberdeen, Mr Dick has done a lot of compulsory purchase work on the Aberdeen Western Peripheral Bypass as well as a number of utilities – and is dedicated to securing a fair outcome for all concerned. “If you look after people it can never be the wrong thing to do,” he says. “I really like helping people to get the right level of compensation, whether it’s a case of compulsory purchase or tenants’ improvements on farm.”

Formerly President of the Scottish Agricultural Arbiters and Valuers’ Association, Mr Dick plans to use his year in office to highlight the special skills that agricultural valuers have, which equip them to carry out work across a very broad spread of rural matters. “I do a very broad variety of work myself – I enjoy running my own business as I can focus on my strengths and be interested in everything I do.”

As well as compulsory purchase and tenancy matters, Mr Dick helps farmers with financial analysis and forecasting, having built his own detailed costings spreadsheet over a number of years. He is also chief examiner for the CAAV’s professional exams in Scotland and occasionally lectures in land economy at Aberdeen University.

“I’d like to become more involved in helping out on the course – ensuring it is fit for purpose for the industry going forward. The rural economy is constantly evolving and with it the demands of landowners and businesses. The CAAV works very closely with the Government, providing practical advice on the implementation of policy, and it’s vital that our training institutions evolve with that,” he says. “Becoming President of the CAAV is the pinnacle of my career and I’m determined to leave nothing behind: I don’t ever want to look back and think I could have done more.”

Working alongside the current President Nick Millard this year, Mr Dick will step up to become the CAAV’s President next year. Geoff Coster; Senior Agricultural Valuation Specialist at the Valuation Office Agency, is his Junior Vice President.

Try a new sport at the Bath & West Show