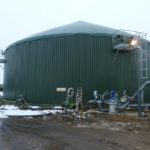 Farmers and rural businesses with an Anaerobic Digestion plant could secure a 10-20% premium on the gas they produce by tapping into growing demand for green energy across Europe.

Although currently most AD plants burn the gas they produce to generate electricity and heat, there is an emerging market for bio-methane, which can be injected directly into the gas main, says Richard Palmer, Energy Consultant at Butler Sherborn Energy. “Although consumers in the UK are reluctant to pay a premium for this green energy, corporate energy customers across Europe are increasingly keen to demonstrate their energy credentials,” he says. “We have secured an agreement with a major energy company, which can pipe green gas through the interconnected gas mains to European customers, so can now offer British producers a share of this premium market.”

The development comes at a critical time for the British renewable energy industry, which is looking increasingly unstable as a result of Government spending reviews and Brexit. “Historically, biogas has been used primarily to generate electricity, supported by the Renewables Obligation and Feed-in Tariffs (FiT),” says Mr Palmer. “However, in 2011 the Renewable Heat Incentive (RHI) helped to kick-start the market for bio-methane injection in to the mains gas grid.  So far this has yielded two income streams: the RHI and the wholesale gas price. Now there is a third source of revenue, offering a 10-20% premium over current wholesale gas returns.”

Lucy Hopwood, Director at bio-economy consultant NNFCC, says that gaining added value for green gas is very timely in light of recent tariff reductions. “It’s no longer possible to add additional capacity under the FiT scheme and the same is soon likely to be true of the RHI, so for many plants expansion isn’t an option – they must make better use of what they have,” she explains. “Developers are also starting to look at how they can increase productivity, without the expense of capital outlay.”

Existing plants can be converted to purify the gas by removing carbon dioxide and trace gases, after which the bio-methane is injected into the gas main and sold as renewable fuel, tracked via international trading schemes.

“Until now, Green Gas Certificates have represented little added value to the producer, as British consumers are reluctant to pay more for renewable fuel. Only now that we can tap into the European market can the opportunity be realised in the short-term,” says Mr Palmer. “That said, this is still an immature market in the UK and it may be that in the longer term British companies will be put under pressure to cut their carbon output, leading to premiums being available here.”

Gas producers will have to register and meet the sustainability criteria of the International Sustainability & Carbon Certification body. “Most farmers’ AD feedstock will meet these criteria and the costs of any audit required will be covered by the energy company,” says Mr Palmer. “The gas premium will depend on the carbon level of the feedstock, and as power purchase agreements can be made in advance it does not matter if the renewal on any existing gas contract, or commissioning of a new bio-methane plant, is over 12 months from now.”

Farmers’ chance to invest in future of livestock production

Networking: The key to agri-tech success