Dairy processors who are failing to pass on improved market returns to farmers could face a serious backlash and shortage in supplies in future, according to farm accountant Old Mill.

Wholesale dairy commodity markets have risen sharply over the past four months, and yet some processors remain extremely slow to raise the price they pay farmers, says Mike Butler, chairman of the board at Old Mill. “The frustration being felt by milk producers is matched by their concern that milk buyers and processors are focusing on their own bottom lines rather than considering the health of the dairy industry as a whole.”

The prolonged period of low prices, caused by global oversupply of milk, has sent many farmers into a loss-making position, but a tightening of supply and the weaker sterling have boosted wholesale returns by almost 68% since April, to the equivalent of 26p/litre in August. In contrast, the average farmgate price in July was 20.57p/litre, compared to a cost of production of around 28p/litre.

“Global and domestic milk output has dropped and UK dairy farmers have no appetite to keep production levels up while milk is so undervalued,” says Mr Butler. “The weaker pound against the euro has also made imported dairy products more expensive, fuelling the increase in the spot price of domestic milk.”

UK spot milk prices typically track cream values, which in turn tend to follow currency movements, reflecting the importance of the import/export trade across the channel and the Irish Sea (see graph). “Generally farmgate prices follow the trend of the spot market albeit with some small time delays.” 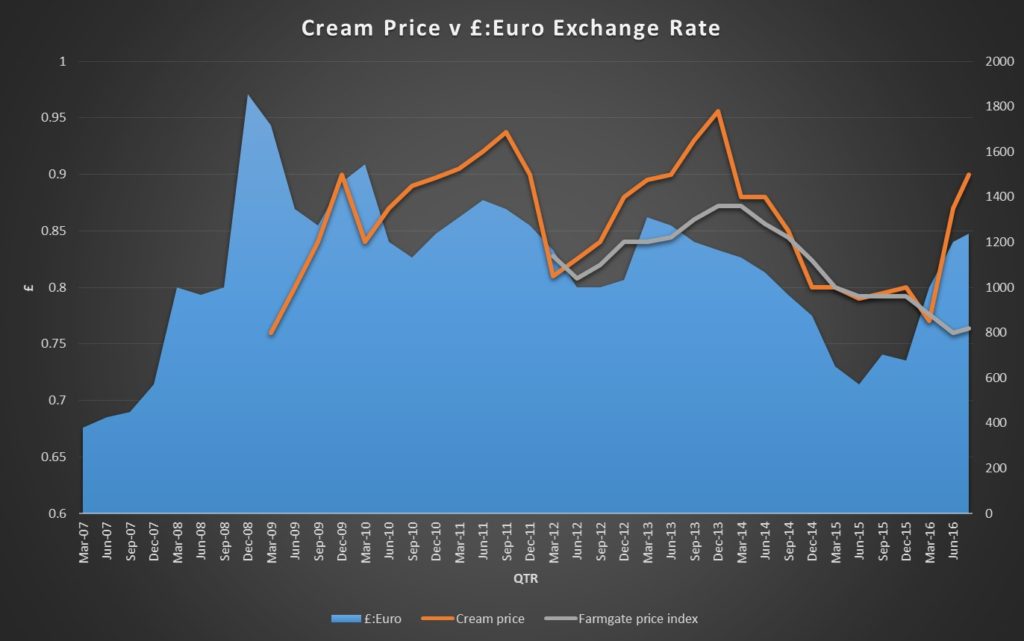 However, since April, wholesale cream prices have jumped by 84%, to £1,470/t, and yet farmgate prices have failed to respond to this upward trend, showing only a 3% rise between June and July to 20.57p/litre – 1p/litre below the April average. So why is that? “Part of the answer may lie in onerous milk contracts which many producers are bound by,” explains Mr Butler. “Notice periods and penalty clauses are all contributing factors that allow processors to control their farm producers without taking reference to market forces.”

Processors may feel they have the upper hand in the short term but all producers have the ability to serve notice and move their supply away, he warns. “Furthermore, all processors require milk to run their plants and they have obligations to customers to fulfil. It’s vital that they consider the medium to longer term and understand their business strategy and what’s best for the industry as a whole.”

Fortunately, some processors have recognised the need to address the dairy crisis and have begun to change contracts and move prices up. “They recognise the value and security of milk supply their producers offer and are engaged in constructive dialogue to improve the situation by linking the prices they can achieve from their own customers with the price they can afford to pay their farmers.”

But it’s vital that other processors follow suit, and fast. “Farmers have proven extremely resilient in the current downturn, cutting costs to the bone and retaining a significant asset base,” says Mr Butler. “One thing is for sure, a milk processor will go out of business quicker than a farmer if they stop receiving milk from their producers. Those processors and milk buyers that ignorantly and perhaps arrogantly carry on taking advantage of the current market may well find that the honey they taste today may soon turn particularly bitter.”