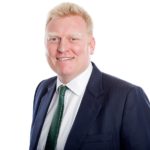 Despite a marginal increase in milk prices towards the end of 2016, extended low returns and higher production costs mean dairy farmers’ fortunes aren’t making the sharp improvement they would like.

Based on analysis of clients’ accounts with a March 2016 year-end, and working with the Farm Consultancy Group to predict future trends, Old Mill calculated that milk prices averaged 26.34p/litre in 2015/16 and will only rise to 26.50p/litre in 2016/17. That compares to a cost of production of 29.05p/litre and 29.31p/litre, respectively.

However, when non-milk income – from calf and cow sales, for example – is included, producers averaged a small profit of 0.99p/litre in 2015/16, which is set to rise to 1.08p/litre in 2016/17. “It’s important to bear in mind that these figures do not include the single payment, rent, interest charges, drawings or tax but do include depreciation and an imputed charge of £28,000 per person for unpaid labour,” says Andrew Vickery, head of rural services at Old Mill.

The figures also show a marked difference between the top and bottom 25% of producers. Production costs among the lower quartile were a hefty 33.87p/litre, against 22.84p/litre in the top 25%. “Feed costs were 2.02p/litre higher and power and machinery expenses were 3.34p/litre higher,” says Mr Vickery. The bottom 25% also received 2.29p/litre less for their milk, at 25.01p/litre. This meant they made a loss of 5.65p/litre in 2015/16 – including non-milk income – compared to the top quartile’s average profit of 8.75p/litre. 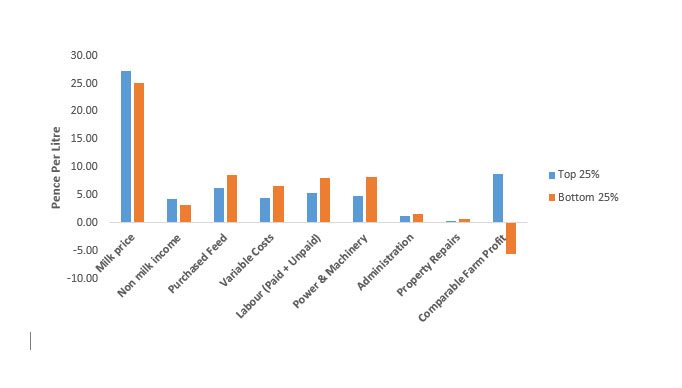 “It’s encouraging to see that, even in these tough times, the UK’s top dairy farmers are still managing to make a profit,” says Mr Vickery. “All producers have looked hard at their cost base and found ways to reduce expenditure. However, while many have improved efficiencies, there is now very little meat left on the bones for any further cost reductions.”

Following the prolonged period of low milk prices, cash flow is one of the most significant issues many producers are facing, he warns. “That’s why it is important to look forward and plan ahead rather than focus solely on past data.”

According to Phil Cooper, partner at the Farm Consultancy Group, milk yields have dropped back as farmers have fed less concentrates over the summer, and are likely to remain suppressed over the winter due to the lower energy silage. “Feed costs in 2016/17 are expected to increase by 0.72p/litre due to the weaker pound, but farm maintenance costs are set to remain low as businesses put off expenditure until milk prices improve.”

So with another lean winter ahead, what can farmers to do safeguard their business in anticipation of better times? “Looking at the top and bottom 25% of producers, the main areas to focus on are cutting feed costs by making better use of forage,” says Mr Cooper. “Other key issues include vet and medicine costs, labour, machinery and contracting expenses, and insurance.”

Improved dairy commodity values are now starting to filter through to farm-gate milk values, so producers need to make sure their business is in the best possible shape going forward, he adds. “Don’t make drastic changes in times of uncertainty, but do plan ahead. Take professional advice and understand your costs of production, so that when you make a decision to change you’ll know it’s the right one.”

Old Mill and FCG will be unveiling the full results of the survey at the Dairy Show on 5 October.