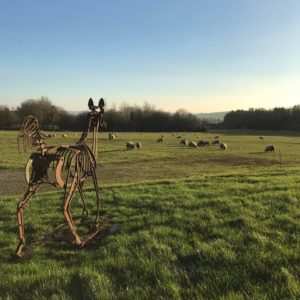 Schedules for the 2017 event – to be held from 31 May to 3 June – have just been released, including many new and exciting opportunities for competitors. “Whether it’s heavy horses, show jumping or racehorses –  there will be something for everyone at this year’s show,” says Head of Shows Alan Lyons. “In the past year we have invested over £120,000 in a new equine area, with woodland horse walks, parking, and dedicated show rings; it will look absolutely stunning.”

Moet & Chandon champagne will be the headline sponsor of this year’s classes, giving its name to the new 80x80m show ring, which will draw audiences for the Cuddy, Working Hunter and Retraining of Racehorses championships. There is also a new dedicated in-hand ring and a massive 120x82m grand ring which will host many of the flat ridden classes.

“Horses are a very important, but often overlooked part of the rural economy,” says Mr Lyons. “Whether its feed companies, vets or livery, they are all part of the industry and the Royal Bath & West Show is a place where the equine sector is really promoted. The investment and headline sponsor have really upped the ante for equine exhibitors, with more room for everyone, as well as a dedicated food court.”

The Main Ring will remain a crowd-puller, with a brand new class – the Jockey Challenge – added this year. Jockeys and showjumpers will be paired up to ride a parallel course against the clock, which is sure to get the adrenaline pumping. Private driving, Pony Club games and the inter-hunt relay remain popular fixtures.

As the show is blessed with great surrounding racecourses, including Cheltenham, Taunton and Wincanton, greater emphasis is being put on the Retraining of Racehorses (RoR) classes this year. “There’s always a question over what to do with a horse when its racing days are over,” says Mr Lyons. “This year, we’re extending the RoR classes – it’s great to see these horses get that second lease of life.”

As always, there are plenty of Horse of the Year Show (HOYS) qualifiers, and this year the Cuddy championship qualifier will be judged by Scotland’s David Blair. Founder of the Waxwing Stud, Mr Blair’s Waxwing Thumbs Up was crowned Supreme Pony Champion at HOYS 2007.

“With top class judges, national qualifiers, £50,180 of prize money and a dedicated new equine area, entries are likely to reach record levels,” says Mr Lyons. “We look forward to giving competitors a warm welcome in what we hope will become one of the most picturesque settings in the country.”