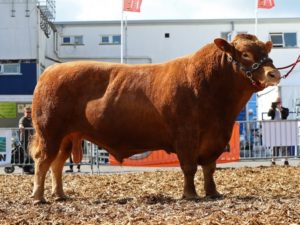 Mells Park Trust, based near Frome, Somerset, scooped the trophy with their three year-old bull Carzise Claudius 1, on his first ever show outing as a grown bull. “He was shown as a yearling, but this is our first time out with him,” explained farm worker Lucy Gould. “We bought him last March at the Exeter bull sales from Lionel Pascoe, who is the South Devon Herd Book Society president this year.”

Sired by Grove Claudius 102, this bull impressed in the ring with his sheer size and traditional South Devon characteristics. “He’s got a good back and clean limbs, and he walks well,” said Lucy. “He’ll go to the Three Counties Show next and then we’ll turn him out to work with the cows.”

The farm calves 120 pedigree South Devon cows a year, and had success with another bull Mells Park Impecabull, who won the junior bull class. “It felt pretty good to win that and the interbreed championship,” added Lucy. “We won the interbreed championship in 2014 with Mells Park Bertie, and we never thought we’d win it again. To win so quickly afterwards is really amazing.”

“This cow has a super udder, feet and legs,” said judge Jeff Daw. “She has got a great future ahead of her.” The three-year old homebred Fledgling, shown by the Cox’s daughter Tanwen, is a second calver and is yielding 23 litres a day having calved in December. “Last year she gave 6,000 litres as a heifer,” said Helen. By Tower Vale Prime Tequila and out of IJB Sambos Fledgling, she runs alongside the family’s 140 milking cows, including nine Guernsey and six Ayrshire cows.

“We won the Guernsey championship with Glanmor Hercules Okapi – and last year we had the two breed champions as well,” said Helen. “It’s a lucky show for us; we always sell stock as a result of the show and it’s a really friendly event.”

A record 1,525 sheep competed for the interbreed crown, which after long deliberation went to John Jordan’s fabulous two-shear Scottish Blackface tup. Bought in Northern Ireland as a lamb two years ago, he had success at the show last year, as part of the interbreed group of three. “His size, bone and colours were tremendous even as a lamb,” said John. “He’s just pure class and quality – they don’t come along like him every day.” With 1,000 breeding ewes on Dartmoor, John will next be exhibiting at the Royal Cornwall Show.

DC Ritchie and EA Halcrow’s pair of Hampshire Down ram lambs took the reserve championship, having travelled down from Kettering in Northamptonshire. “This is the third year in a row we’ve won the breed championship, and it’s the 40th anniversary of the Parkstock flock,” said Alison Halcrow. Their next outing will be at the Rutland show, followed by the breed national show at Stratford Upon Avon and the Royal Welsh Show.

The pig rings were as lively as always, with plenty of traditional and modern breeds in competition. Chard-based Alan Rose lifted the interbreed championship with his Duroc boar Maddaford Thunder 3. “It’s an amazing feeling – to win at the Bath & West Show is always special – you come hoping to win something but you don’t know if you’ll be lucky enough for the best pig you’ve got to be better than the best pig everyone else has got.”

With 40 breeding sows at home, this was Alan’s first show with Thunder, who will now be heading to the Royal Cornwall Show. “He was born on my birthday in September last year – he turned out to be a wonderful birthday present.”

International flavour at the Dairy Show