It takes a team effort to prepare the largest dairy show in the country, but at the heart of it all are the exhibitors. For them, the Dairy Show is an opportunity to compare their animals with the best in the industry, and identify potential new genetics to add to their herd.

This year, the Dairy Show will also be host to the National Jersey Show, attracting exhibitors from across the country, including local man Mark Davis. “It is really exciting that the Jersey Cattle Society will have a national show this year,” he says. “I think it will attract large numbers and put on a great showcase.”

A farmer’s son, Mark works as a full-time livestock auctioneer at Kivells but is also involved in the management and breeding of the cattle on the home farm, as well as milking every other weekend. Mark’s family, including his parents – Gordon and Hazel – brother Kevin and sister Emily, have been at Westcott Farm, Tiverton, Devon, for over 30 years and everyone is involved with the business. Gordon runs the farm, while Kevin deals with the tractors, field work and maintenance, and though Emily is in school, she keenly helps out with showing.

“I started showing in 2004 and just got the bug,” says Mark. “No one else was interested when I joined Kivells, so it was just a hobby away from work. Now my sister has become involved, clipping and prepping; it is nice to have her to help me.”

The pair have already been very successful at local shows this year, winning a number of classes, including the breed champion and reserve interbreed at the Devon County, the Royal Cornwall, Mid Devon and Honiton shows with Windyridge Tequila Diamond, jointly owned with Emily Murray.

The family works as a team and have built a successful business with 200 pedigree Jersey cows and 120 followers in their Rivermead herd on the 93ha farm. However, to get to where they are now, they have had to weather some difficult storms.

In October 2015, when milk prices were falling through the floor, the family faced an enormous challenge when their milk buyer, Cricketer Farm, halted production. Though Cricketer continued to buy milk until January 2016, it was at the spot price, leaving finances very tight. “We were faced with the position of either doing something or having to sell the cows and get out of dairy,” explains Mark. “So we decided to market our own milk.” 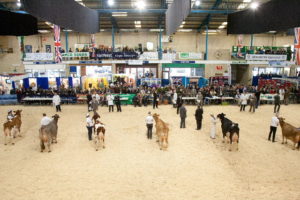 y in London to sell the milk to and along with ex-managing director of Cricketer Farm, Greg Parsons, set up the producer group Davis and Parsons. Taking on milk tankers from Cricketer, they supplied the catering company with milk from six farms and within an 18-month period expanded to 14 farms and three milk tankers supplying different companies in London and Leicester. “It has not been without its challenges and the first six months were very difficult,” says Mark. “It took an awful lot of work and guts, but it just goes to show that there is demand for Channel Island milk out there.”

The farm used to keep Holsteins but in 2003 took the step to bring Jerseys in from a farm in Norfolk. “Dad meant to sell the Jerseys on again but mum and I fell in love with them and the herd has grown from there,” says Mark.

“I left the farm in 2009 to become an auctioneer and we dropped the Jersey numbers back to 40, but they were so efficient we increased them again and then six years ago we got rid of the Holsteins,” he adds. Gordon still keeps around 20-30 Holsteins, buying them in as pregnant cows and selling them freshly calved.

Mark is keenly focused on the breeding of his animals, selecting high type bull semen from Cogent and Semex. “I am looking more at production and milk quality as it’s important to not lose out on the product.”

When selecting which cows to show he looks for one that is deep bodied with a quality udder and correct legs and feet. She needs to stand well in the line as the show is a good market window for her potential progeny. “It is about promoting the breed and showing the great things Jerseys can do. The breed is in a great place and we should be shouting about what it can do.

“Shows are also a great place to meet wonderful people and they are an important part of our farm,” he explains. “It can be easy to say you’re too busy to get off the farm, but you can learn and make improvements by seeing other cattle.”

Mark says his ultimate aim is to win a show with a home bred animal. “It is only now we are really getting to the stage where our own breeding is coming through.”