Dairy farmers lost an average of 3.49p/litre in 2016/17, following the prolonged spell of disastrously low milk prices, according to a new survey by accountant Old Mill. However, incomes are set to increase markedly in 2017/18 amid soaring dairy demand and values.

Based on Old Mill and Farm Consultancy Group (FCG) clients with a March year-end, dairy farmers had an average cost of production of 29.20p/litre in 2016/17 – well above the average milk price of 25.71p/litre. When taking non-milk income, such as calf and cow sales, into account – but not including rent, finance or the single payment – the average farm profit was 0.28p/litre.

“That was well below our forecast profit of 1.08p/litre this time last year,” explains Mike Butler, chairman of the board at Old Mill. “And it is purely down to the extended period of low milk prices. Farmers cut expenditure as far as possible, in areas like property repairs and variable costs, but there was only so much they could do to offset the catastrophic milk price.”

Fortunately, the outlook is now considerably brighter, with milk prices predicted to average 29p/litre in 2017/2018 and non-milk income pegged at 3.3p/litre. “Efficient businesses should be able to generate a profit of around 3p/litre, with the more efficient operators sitting above 5p/litre,” explains Phil Cooper, partner at FCG.

Costs of production are set to remain virtually unchanged at 29.19p/litre (including imputed costs of £30,000 for unpaid labour), with feed and fertiliser prices dropping back while other areas increase. “We would expect to see increases in vet and medicine costs as more businesses start vaccinating stock – although some of this should be offset by a reduction in dry cow therapy as milk buyers encourage selective dry cow treatments,” says Mr Cooper. “Silage costs are expected to increase due to the good grass growing year. And depreciation could rise slightly as renewed confidence leads to increased investment.” 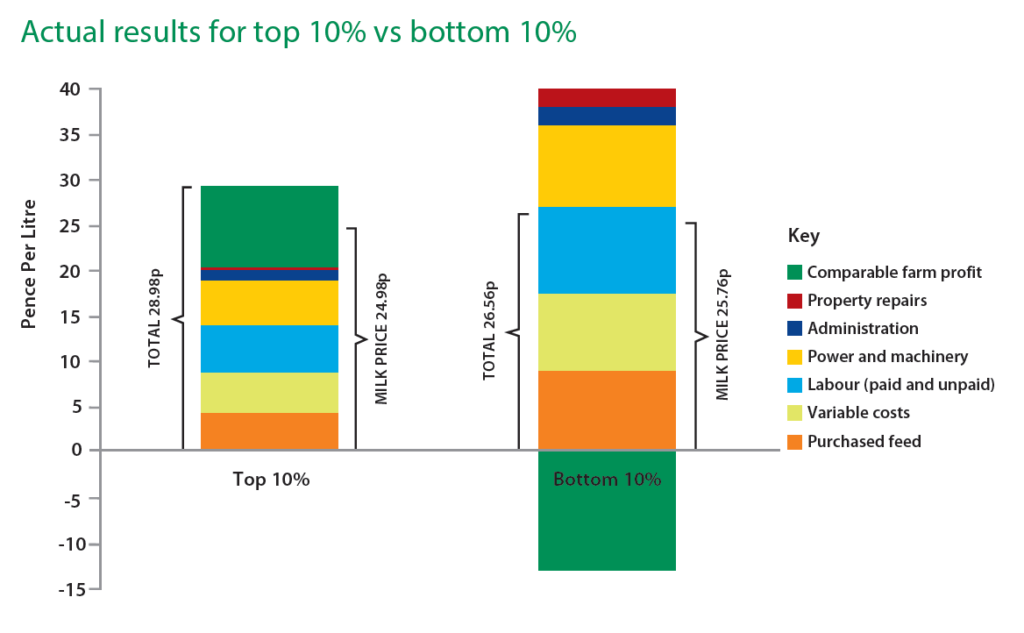 With current predictions showing a shortage of milk going into the winter, there are plenty of reasons to be optimistic, he adds. “That said, it is important to continue to focus on making your business more efficient.”

Analysis of the top and bottom 10% of producers shows that feed, labour and machinery costs are the main areas on which to focus. Perhaps surprisingly, the bottom 10% of producers received 0.77p/litre more for their milk price than the top 10%, at 25.76p/litre in 2016/17. Although their herd size was smaller, their yield per cow was higher – but at a steep cost, with expenditure on purchased feed more than double that of the top 10%, at 8.73p/litre. Overall, the top 10% managed a comparable farm profit of 8.94p/litre last year, against a loss of 13.06p/litre among the bottom 10%.

“It is encouraging to see that the top producers can continue to make a profit at times of low milk prices,” says Mr Butler. “And there is a much brighter outlook ahead, with the average 2m litre producer likely to see profits rise from £5,600 to £62,200 in 2017/18. However, it will take months, if not years of trading at this level to repair depleted balance sheets – and we would like to see profits rise further, not least through greater efficiency gains. Farmers need to plan carefully to retain as much profit in the business, with one eye to investing for the future in the most tax-efficient manner possible.”

It’s also vital that producers don’t simply ramp up milk production again, as it will tip the balance towards another downward cycle, he warns. “There is no perfect solution, but the more producers who understand that over-production will destroy their market, the greater the chance this precious industry has of maintaining a sensible level of profitability.”

Old Mill and FCG will be unveiling the full results of the survey at the Dairy Show on 4 October.