Poultry smallholders could save up to 25% – and boost bird health and productivity – by using a new medicated wormer to tackle internal parasites.

“Historically, smallholders have faced a decision between treating poultry with a relatively costly medicated wormer, using preventative herbal products which don’t kill worms, or just leaving them untreated in the hope that they don’t get sick,” explains Diederik van Rijn, founder of Kernfarm, which manufactures the new product. “Now, they can use a tested and licensed medicated wormer at a fraction of the price – it’s a win-win.”

Chickens, geese and turkeys are affected by several species of parasitic worms, which can lead to a variety of health problems. “Whether you have free-range or housed poultry, worm burdens can quickly build up if left untreated,” explains vet John Kenyon from St David’s Poultry Team. Common worms include roundworms, hairworms, and caecal worms – which can cause the fatal disease Blackhead.

Symptoms of worm infections include poor weight gain, reduced egg quality, anaemic birds with pale combs, increased vent pecking, egg peritonitis, and in heavy infestations, death. “For this reason it is important to regularly worm your flock, every 3–4 months,” says Mr Keynon. “We recommend worming with products that are specifically licensed for use in poultry as these have been proven under strict testing conditions to be effective against the species of worms found in poultry. You can even continue to eat the eggs your birds lay during the treatment.” 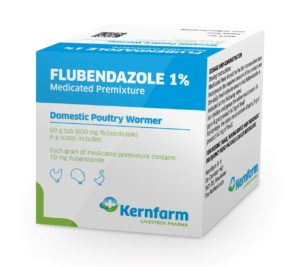 the same as the existing market leader Flubenvet 1%, but is considerably cheaper, saving poultry keepers up to 25% in price. Made specifically for chickens, geese and turkeys, it is effective against gapeworm, large roundworm, caecal worm, hairworm and gizzard worm. Activity includes adult worms, larvae and eggs – targeting the whole worm life cycle.

“Poultry keepers can ask for Flubendazole 1% from their vet or wholesaler,” says Mr van Rijn. “When it comes to bird health and productivity, only the best will do – but it doesn’t have to cost the earth.”