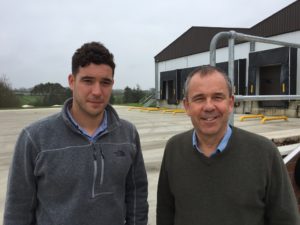 David, Suzanne and Tom Simmons, the family behind Riviera Produce, have been crowned Cornwall’s overall Farmers of the Year.

Beating off record entries in the Addington Fund’s Cornwall Farm Business Awards, the family received their accolade – sponsored by Cornish Mutual – at a glitzy awards ceremony at the Royal Cornwall Showground on Thursday (26 April).

“What the Simmons family have achieved with Riviera is incredible in terms of growth, profit, efficiency – and as a supporter of the local economy – and they deserve all the plaudits thrown at their door,” said Bill Young, CEO of the Addington Fund charity, which organises the awards. “Every county needs a Riviera and Cornwall is lucky enough to have them benefitting the rural economy.”

The family, who farm at Higher Trevsakis Farm, Hayle, also topped the Best Commercial Farmer category – sponsored by Carter Jonas and AMC – before going on to take the overall title.

The business has achieved incredible growth since the 1980s, evolving from a 160-acre mixed farm to one of the country’s leading brassica growers, covering 5,500 acres and supplying the UK’s major supermarkets. The combined business employs 200 people in Cornwall and a further 250 Eastern European staff at peak times of year, with robotic and GPS technology to maximise efficiency. “The business has strong environmental credentials and financial control is exceptional, with profit margins recorded down to individual field level,” added Mr Young.

Farming stalwart Peter Clark, Cornwall’s Farming Community Network representative, was presented with the Farming Champion award, celebrating his commitment to helping the agricultural sector. “Peter has a lifetime of dedication to the farming and wider countryside communities, and a genuine desire to seek justice for farming families,” said Roger Jenkin, county chairman of the NFU, which sponsored the award. “Feared and revered by politicians and authority alike, and renown by many for his determined character, he is a deserved winner.”

Gayle Bersey from Triffle Farm, Torpoint, scooped the Best Woman in Farming award, sponsored by the Duchy of Cornwall. Gayle started The Lynher Valley Aberdeen Angus herd in 1994 and has great success both commercially and on the show circuit, said Melanie Squires at the NFU. “She set up an NVQ qualification with Duchy College and is both admired and well respected within the industry.”

Also from Torpoint was David Turner, winner of Best Livestock Farmer, sponsored by PKF Francis Clark. With his family having farmed at Mendennick Farm since 1922, David took the business over aged 20 and grew it into the 1600-acre organic enterprise that exists today, with over 2,000 Highlander ewes and 65 Stabiliser cattle.

In the Best Farm Processor competition, sponsored by Savills, Roger and Tanya Olver’s Cornish Duck business took the honours. Breeders and producers of award-winning table duck and duck eggs at Grampound Road, they sell at local farmers’ markets and directly to chefs. The judges were bowled over by the sheer will and determination of the Olvers, who deal with every aspect of the process themselves.

Rodda’s sponsored the Best Dairy Farmer award, which was claimed by Tom Nicholls and John Heller at Acland Farm, Blackwater, Truro. Since joining the team 10 years ago, Tom has worked together with John to transform the dairy enterprise to a highly efficient unit with seven robotic milking machines. “The attention to detail is impressive; this is a highly efficient dairy unit where nothing is left to chance,” commended Gareth Rowe at Savills.

In the Best Young Farmer category, sponsored by NatWest, Tom Jones beat off strong competition to win for Trelay Farm, Davidstow. He has moved from a high-yielding system to a grass-based approach to improve the business’s sustainability, and is now moving to spring block calving to improve efficiencies further.

Tom has a deep understanding of the individual costs of his business and his dedication to the continuation of his dairy farm while not compromising herd welfare or output is extremely impressive, said Kate Theophilus at Stephens Scown. “It is refreshing to see a young farmer having an equal say in the business to the point where what he has achieved is more revolution than evolution.”

The awards were presented at a black tie dinner on Thursday, 26th April, to raise money for the Addington Fund farming charity.

More information can be found at www.addingtonfund.org.uk/events