Pig and poultry producers are fit and ready to embrace change, with a bright outlook ahead despite a few Brexit clouds on the horizon.

Visitors to the British Pig & Poultry Fair were in buoyant mood on Tuesday, with standing room only in the popular Forum programme and trade stands buzzing with producers looking to invest in their businesses.

“In a recent survey we discovered that 63% of pig, poultry and egg producers feel positive about their business outlook in the next two years,” explains show organiser Alice Bell. “And nearly 80% of visitors to the last Fair planned to make changes to their business as a result of visiting.”

Producers flocked to hear industry experts offer their opinions on the outlook for each sector, with Mark Williams from the British Egg Industry Council kicking off with a forecast for the egg industry. “It is expanding every year,” he explained. “The UK is 86% self-sufficient so there is an opportunity to replace imports – but to expand further we need to knock imports on the head. If we don’t, we go into oversupply.”

Richard Pearson from Chippindale Foods said that good attention to detail by staff could add £1-2 income per bird over the course of a flock, so concentrating on recruiting and retaining the best workers is key. “Image is everything – it’s really important that we do everything we can to improve it,” he explained.

British eggs have a very positive image, and it’s vital not to compromise that through unpopular large-scale developments – but there are also opportunities, with changing consumer trends opening up the potential to develop new brands and ways of marketing, he added.

Price pressure throughout the supply chain will continue to be a battle for poultry meat producers, but using new technology to improve efficiencies and branching into alternative forms of production could be the answer, explained Patrick Hook from PD Hook . “Efficient production remains key but I do think we need to have another offering – perhaps slow-grown chicken is next?”

Access to labour is an issue for the whole supply chain ahead of Brexit, with EU labour making up a significant proportion of the farming and processing sectors. In a bid to create a new pipeline for workers, the British Poultry Council, NFU and Poultec launched a new apprenticeship standard at the Fair, placing greater emphasis on all-round development to shape successful workers for the future.

Tesco also reaffirmed its commitment to the British poultry sector, with agriculture manager John Kirkpatrick emphasising the need for robust science and evidenced fact to portray positive messages to British consumers. “The standards (the poultry industry) works to are world leading – we are the envy of many, globally,” he said. “Ultimately, we all serve our customer and need to focus on that customer.” 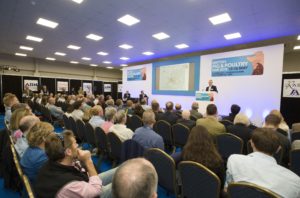 Recording and reporting the health and welfare outcomes from management inputs is helping the industry to celebrate areas of success and target areas for improvement – and Tesco now has three years’ global data to work on. “The industry has done a fantastic job on antibiotic reduction and others look to the UK for guidance,” said Mr Kirkpatrick. But he challenged producers to do more on reducing pododermatitis and hock burn, with supply chain partnerships key to survival for all.

In the pig sector, producers remained in the black throughout 2017 and into 2018, with processors also enjoying profitable times, said Mick Sloyan at AHDB Pork. “That bodes well for the whole supply chain.” The successful marketing campaign on the healthy attributes of pork fillets and loin had boosted consumer demand, yielding a £6.43 return on every £1 spent, and AHDB has further plans for a TV campaign in September, he added.

Export trade remained buoyant due to the weak Pound, and would be critical to the industry after Brexit, said Ed Barker, senior policy adviser at the National Pig Association. Some 70% of UK pork exports go to the EU – so trade deals will be extremely influential. “I believe an EU trade deal will come ahead of all others, but the Irish border will define Brexit.”

However, Government demands in the Health and Harmony Paper could leave the industry trying to do too much at one time, with too little resource. “The Government wish list is too much to be able to have it all – there will be a trade-off and we need to have a strong industry voice,” said Mr Barker.

Andrew Saunders from Tulip Foods said it was important to keep focusing on high welfare standards, but not the extent that the industry shoots itself in the foot and opens the doors to cheaper imports. “We need to build transparency in the supply chain and sell our positive story.”

Danny Johnson, head of commercial at ABN, said it was brilliant to see such a positive turnout at the British Pig and Poultry Fair. “Sharing insight and best practice is key to the future of the pig and poultry sectors, so it’s great to see so many attendees making the most of the forum sessions, arming themselves with some great knowledge on how to best use innovation and technology.”

·         The British Pig & Poultry Fair is the leading event for the UK pig, poultry and egg sectors, and continues tomorrow, 16 May 2018 at Stoneleigh, Warwickshire. Partnered by ABN the Fair is free to attend, to register and plan your visit go to www.pigandpoultry.org.uk.