Pig and poultry producers see the use of new technology to improve performance as one of the greatest opportunities in the years ahead, and there was plenty on offer at the Pig & Poultry Fair.

With everything from needle-free vaccines to automatic building controls, the Innovatin Trail helped visitors to identify the latest technology to reach the market. And scooping the Pig World new product award was a 3D scanner designed by a pig farmer to automatically ‘weigh’ finishing pigs. The Fancom eYeGrow, created by Shropshire-based Harry Heath and his software designer brother-in-law Ben Wimmo impressed the judges as the one product that would have the biggest positive impact on the future of the industry.

Sold through JF McKenna, the eYeGrow took four years to develop, with the internet-based sensor suspended above the pigs and taking up to 20,000 readings a day, generating weigh data within 3% of actual body weights. “We need to know about weight continually throughout the process as historic data is no good,” said Mr Heath.

Farmers can use the system to measure feed conversion ratios and to spot any knockbacks in weight gain, enabling them to proactively manage change, without the stress and difficulties of weighing individual pigs. “It’s nice to have something that can change the industry,” he added. “I’m really passionate about that.”

Another new development, from the Scottish Rural University College, involved the use of 3D cameras to help farmers spot the early warning signs of tail biting, enabling them to act to prevent it. The research showed that pigs held their tails down against their body when tail biting is about to begin. “This research has achieved everything we hoped for,” said lead author Dr Rick D’Eath. “The challenge for us now is to develop this promising technology into a robust early warning system that works on any pig farm.”

In the broiler sector, ABN launched a new farm and supply chain management package at the Fair, designed to help optimise bird welfare and improve financial returns. Total Farm Performance consists of three service areas, which can be used alone or together: inFarm, inFocus and inDepth. The first takes a practical whole farm approach to optimise bird performance, the second brings together all the data for daily decision making, while the latter is retrospective data analysis.

“The broiler industry is one of small margins where little improvements can have big pay offs,” said Tom Glen at ABN. A trial of the service yielded a 9p improvement in margin over feed, and chick improvement. “If you scale that up to a larger broiler farm producing one million birds a year, the outcome could equate to around £90,000 extra margin.” 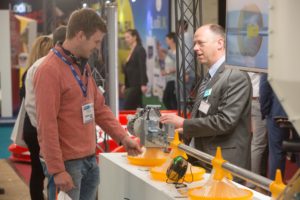 While there were plenty of housing systems and equipment on offer from more than 350 exhibitors, research by the Scottish Rural University College and ADAS, unveiled at the Fair, showed that farm management influences free-range layers’ welfare more than the housing system. In the first independent study of its kind in the UK, which compared flat deck and multi-tier housing, the research ousted any idea that one system is better than another.

Working with 42 flocks over 12 months, in conjunction with the British Free Range Egg Producers’ Association, scientists looked at a range of health and performance indicators. They found that while production was higher in multi-tier sheds, there were more keel bone fractures, whereas flat deck sheds had fewer fractures but higher mortality. “It’s clear that there are advantages and disadvantages to both systems,” said Bfrepa chief executive Robert Gooch. “The essential component to ensuring high standards of hen welfare is good stockmanship.”

There were a number of new products to help farmers improve their management, including new wireless environment monitors from PrognostiX, which were launched at the event. A collaboration between vets, computer engineers and data analysts, the package gives farmers a better understanding of environmental parameters, helping them to improve efficiencies and productivity across all pig and poultry sectors.

Being wireless, the monitors are a third of the price of wired sensors, meaning producers can install many more in a shed, providing a more complete picture of parameters including temperature, humidity and water consumption around the unit, said the firm’s Kenny Nutting. “Other applications can also send information into the same system, making it a very user-friendly option. The software immediately transforms the data into clear, visual representations that enable users to monitor performance over time and quickly identify trends of discrepancies, with automatic alerts when something goes wrong.”

Of course, when things do go wrong producers need to act fast, and the Responsible Use of Medicines in Agriculture Alliance (RUMA) had a series of experts on stand to help farmers identify how to reduce antibiotic usage without compromising animal health and welfare. “It’s really important to have rapid diagnostics,” explained Professor Mark Fielder, who sits on RUMA’s independent science group. It can take 48 hours or more to identify what pathogen animals are infected with, by which point they may be past treating.

Kingston University is working on a number of projects to detect salmonella, staph aureus and mycoplasma more quickly and easily, with other research institutes doing similar work, said Prof Fielder. “If you know what you’re dealing with you can target it with the right antibiotic rather than having to take a broad spectrum approach. Dead bacteria don’t cause resistance.”

For those at the customer end of the supply chain, and wanting to add value to their produce by processing it themselves, Create a Cabin launched a new modular building shell to build a barn within a barn. The steel panel buildings are easy and cheap to construct, without the need for planning permission when inside an existing building, enabling producers to process their own produce on-site. “Forward-thinking farmers have moved from simply rearing livestock to adding value and selling the end product,” explained the firm’s Sebastian Dont. “We can make this simpler by avoiding the health, hygiene, planning and regulatory challenges.”

Event organiser Alice Bell said feedback from both visitors and exhibitors at the Fair had been tremendous. “It’s been a fantastic couple of days, with everyone enjoying this unique opportunity to network and find out about new products and ideas,” she said. “We hope that everyone has taken home some valuable information and tools to improve their business, and look forward to welcoming them back again in May 2020.”