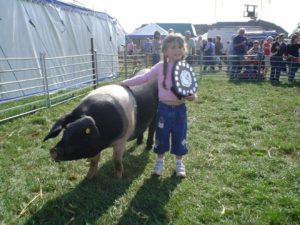 Charismatic and intelligent animals, pigs are a popular attraction at the Royal Bath & West Show. But they are not the easiest animals to exhibit, as there are usually many pigs in the ring at the same time, and they can be headstrong, explains head of shows Alan Lyons. “Even so, the exhibitors always do a fantastic job and get the very best out of their animals, putting on a great show for visitors and ensuring strong competition.”

From traditional rare breeds to modern commercial stock, the Show attracts the best of the best, and to pick an overall winner requires an experienced and professional eye.

Judging the Interbreed Supreme Championship at this year’s show is Kevin Matthews, who has been showing pigs since he was about 13 years old. A builder by trade, he got his first Saddleback pig aged 10 after taking an interest in them, and his passion has grown from there. “My dad is a chef but I really liked pigs and wanted a couple.”

Based at The Piggeries near Scarborough, Yorkshire, Kevin’s Lowpark herd has had a lot of success in the show ring. So much so that by the young age of 18 he was being asked to judge.

One of his showing highlights was winning with a Large Black at the Bath & West Show. “Winning there is everything to me. I had Large Blacks for my 21st birthday and I went on to win with them.” In his showing career he has won at shows up and down the country and has never come away from the Bath & West without a trophy – and now he loves judging at the show.

As a judge, he has also presided over the prestigious Pig of the Year competition in Yorkshire two years ago. “I was proud to do that – it doesn’t get any bigger than that competition.”

However, he has had to cut back his herd recently to accommodate for being so busy at work, and is just running three Saddlebacks, one Large Black and one British Lop sow. “My dad does all the hard work now – he’s a brilliant stockman.”

When selecting animals, Kevin is looking at shape, conformation and for something that stands out with a good head. “The breed standard is everything to me as the standards are there for a reason. I also concentrate on feet. If you don’t have good feet, then you’ve not got an animal,” he explains. “Make sure your breed standards are correct, your pigs are clean, you’re clean and don’t hide in a corner of the ring.” He suggests exhibitors should keep moving and get their pigs under the judge’s nose. “Move them in big circles, so the judge can see they are fit and can walk properly.”

However, the actual time in the ring only accounts for about 10% of an exhibitor’s showing success, he says. “It’s 90% about the preparations at home, training the pigs and ensuring they’re in top condition.

For Kevin, showing has brought rare breeds back into the limelight and stopped them from disappearing. “Rare breeds used to never get a look in and it was just white pigs, but now the majority in the show ring are traditional breeds. If we didn’t farm and show them, they wouldn’t be around now.”

He still thinks that pigs are a huge attraction for the younger generation. “Kids always want to see the pigs and to learn about them. They need to understand where meat comes from. It’s really important to show what we do to the public.”

Most solar arrays underperform – get them checked