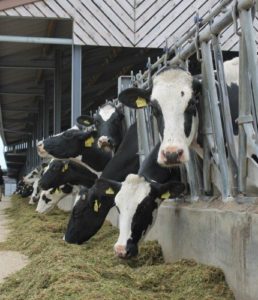 Milk prices – and therefore farm returns – have improved sharply over the past year, but higher feed costs pose a risk, according to the annual Dairy Costings Focus from Kingshay.

The report, which is based on actual figures from almost 2,000 herds with 300,000 cows across the UK, reveals that average margins over purchased feed increased from 16.83p/litre last year to 21.21p/litre in the year to March 2018.

This was mostly due to a 5.14p/litre increase in milk price, to average 28.78p/litre – a welcome and necessary improvement after the very challenging low milk price period. However, higher feed costs eroded some of these gains, so it remains important to focus on efficiencies.

“This is particularly pertinent given the hot, dry summer we are experiencing,” says Richard Miller, services development manager at Kingshay. “Forage stocks could be extremely tight, and, with concentrates already rising in cost, dairy producers are going to have to continue to pay great attention to detail to both keep milk production up and maintain good margins.”

Perhaps surprisingly, given the wet autumn and cold winter in 2017, milk from forage remained similar to the previous year, at 2,542 litres – or 31% of total milk production. This could be due to the close attention paid to forage while milk prices were low in 2016/17.

However, the gap between the top 25% of producers – ranked on margin over purchased feed per litre – and the average grew wider in 2018, with the top 25% producing 1,314 more litres from forage than the average group. “There are clearly lessons that can be learnt from the top quartile of producers, which could directly benefit the bottom line through reduced purchased feed costs,” says Mr Miller.

Further analysis of the figures shows that milk yields increase consistently as average herd size band increases, with the largest herds yielding the highest at 9,203 litres per cow across an average herd size of 592 cows. However, that doesn’t necessarily make them the most profitable.

“There are so many inter-related aspects to farm productivity and profitability – yield, feed cost and milk price are, of course, major factors but labour and replacement costs have a significant bearing on overall business performance,” says Mr Miller. “While larger herds can benefit from economies of scale, smaller herds can keep costs scaled right down.”

With robotic milking becoming more common, the gap in production levels between three-times-a-day milking and robots continues to close, from 1,093 litres in 2016 to 375 litres in 2018. “This perhaps indicates improvements in the technology and management of robotic milkers,” he adds.

“The new South West Dairy Development Centre in Somerset, which Kingshay has established with funding from the Agri-EPI Centre, will further help producers in this context by examining methods to integrate robotic milking with precision grazing.”

So, what’s the outlook given current trends? “It seems that wholesale dairy prices are well underpinned, but the shortage of forage and higher concentrate costs will erode the benefit of firmer milk prices,” explains Mr Miller.

“It’s therefore important to benchmark costings data using independent services, such as Kingshay Dairy Manager, allowing comparison against the best, then seek ways to make the marginal gains which can add up to significant savings.”