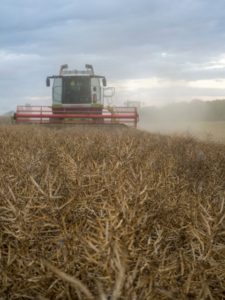 A conventional oilseed rape variety is beating all others – including hybrids – hands down in the latest AHDB Recommended List results, taking it to the top of the field for the second year running.

With just one site left to be harvested, Elevation is top of the table, scoring 106% of the control mean seed yield – with impressive results from Scotland to the South Coast.

“The 2018 season has certainly been a tester for many varieties,” says Clive Sutton, business development manager at DLF Seeds. “The difficult winter and wet late spring have been followed by a prolonged dry period, favouring varieties able to put down a vigorous rooting system and cope with the extremes. Elevation has met that challenge and delivered in spades again this year.”

Although only placed on the Recommended List for the North, the variety has proven its suitability to be grown right across the country, with yields of 108% in both Fife and Hampshire. “And it is consistent, having had the highest gross output in northern trials in 2017, at 107.4%, and scoring well in the east-west trials, at 102%,” adds Mr Sutton. “Taken on average across the UK, it beat every other variety on the Recommended List in 2017.”

From 2015-2017, its average UK results were similarly impressive, coming in at 105%, 104%, and 105%, respectively. “It is a consistent, reliable performer with excellent agronomics. And as a conventional variety you can farm-save seed as well as increase seed rates at drilling to combat potential flea beetle attacks.”

Further afield, Elevation has also found favour across Eastern Europe, where even more extreme autumn rains and summer drought conditions have persisted this year. “This supports the philosophy maintained by the breeder, Mike Pickford, to grow farmer-friendly types that are both high yielding and consistent across all regions and climates.”

The variety also benefits from good stem disease tolerance, which has helped against verticillium wilt and canker, which have been a particular problem this year. “We want the stems to remain green and healthy throughout the grain fill period, to improve photosynthesis and aid grain fill,” explains Mr Pickford. “If you’re looking for consistent high performance and a bold seed sample to swell the yield coffer, you need look no further.”

Cereals 2020 crop plots growing up and away