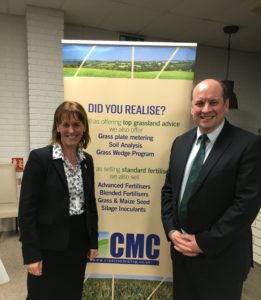 Speaking at a recent meeting in Devon, organised by Crediton Milling, Mrs Batters said it was vital to champion British food to protect against sub-standard imports and grow the market for high welfare domestic produce.

“We need a far more honest, open, transparent labelling system – we need to come behind one brand identity,” she explained. “Assurance has a huge part to play, if we step back and let cheap ingredients come in and slap the Union Jack on, it’s going to work against us and what we’ve built for 20 years.”

Red Tractor recently ran a big televised campaign, which boosted recognition and support considerably. The number of shoppers who said they would choose a Red Tractor product over the cheapest one rose from 36% before the campaign to 41% after. That could equate to 1.4 million shoppers moving from the cheapest brand to Red Tractor, said Mrs Batters.

However, AHDB could be doing far more to promote British farming, she added. “I don’t think it’s doing what we need it to do. The AHDB receives £1million a week from farmers, it’s a huge investment. We need complete transformation of AHDB; the governance structure should be split so we have two platforms: One on research, development, productivity and skills and the other focussed on market development, brand and promotion, which ultimately works as a platform for exports as well as the home market.”

The UK had been under-exporting to Europe for years, so there were tremendous opportunities, said Mrs Batters. But there were also great threats from imported food.

“Our relationships with other countries are very much focussed on agriculture being a key part of the trade package. The British government has given equivalence to Australia and New Zealand on standards, the US is saying the British food market is a huge untapped market for American producers; this means GM, antibiotics that we don’t have, and crops sprayed with banned chemicals.”

Mrs Batters called on farmers to hammer this point home to local MPs and to ask them personally what they’re going to do about it. “We constantly see rising British standards – but they aren’t being championed enough.”

Brexit is of course going to drive big change, but the younger generation are ready for it, said Andrew Power, director at Crediton Milling. “With every threat comes opportunity, and there are plenty of new entrants who want a career in the food and farming industry. They are up for the challenge, the key is to make sure they are well supported, by advisers, consumers and the Government alike.”