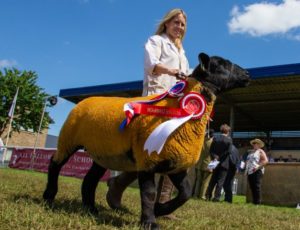 It’s only 100 days to go until the Royal Bath & West Show, and livestock entries are now open, with new classes, top judges and plenty of evening entertainment on offer.

This year sees the Dexter Society hosting its National Show at the event for the first time, which is sure to attract a large entry.

“The smallest cattle breed in Europe, Dexters are descended from the mountain cattle of Ireland,” says head of shows Alan Lyons. “They are very popular with smallholders and provide great beef, and we look forward to welcoming so many of them to the ring.”

Reflecting the importance of commercial success, the Show has introduced two new cross-bred cattle classes and increased the number of commercial cattle classes. “Husband and wife team Jason and Sarah Wareham from Sussex will be judging the commercial and young handler categories, with Jason returning to the Show having exhibited here as a boy,” says Mr Lyons.

Another regular exhibitor, Richard Dorrell from Worcestershire, will be judging the supreme beef championship, while Peter Waring from East Yorkshire will be picking out the supreme dairy champion.

In the sheep section, Portland, Primitive and Shetland sheep now have their own class, and young sheep handlers have an impressive five classes to choose from. “Judging the interbreed pairs championship is Gwynne Davies from Ceredigion – a well-known sheep farmer and the sheep commentator from the Royal Welsh Show,” explains Mr Lyons.

Sheep shearing is always a popular draw, with some of the UK’s fastest shearers competing for the top prize. This year the event will host the South West area qualifier for the National Young Farmers Clubs, leading to the final at the Great Yorkshire Show in July.

Pig exhibitors won’t be left out either, with a new class for veteran sows to complement the veteran exhibitor prize.

Within the Cattle Showmanship competition there is a new discipline for senior competitors in that having judged a class and prepared and shown their animal, they have to set it up and take a ‘Show Standard’ image of it – an important part of displaying livestock to look their best.

“Showing livestock is hard work – with families having to take time off from the farm to attend – but it is certainly worthwhile; particularly at the Bath & West Show, as regular exhibitors will attest,” says Mr Lyons.

“As a keen sheep exhibitor, I know the difficulties of travelling round attending different competitions. But our competitors love the way we make them feel so welcome, with a hugely enjoyable Livestock Exhibitors’ Supper on the final night of the Show and live music going on into the night. Both exhibitors and visitors are welcome to camp overnight and really make the most of the occasion: The camaraderie and atmosphere really is second to none.”

Focus on livestock housing at the Dairy Show

Plan grazing to make the most from grass