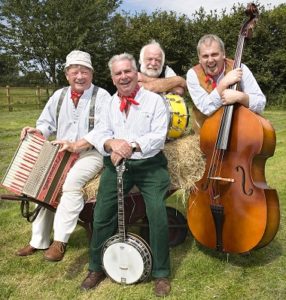 The Wurzels are a country institution – few young farmers in the West Country don’t know the lyrics to ‘Combine Harvester’ – and they are returning to perform at one of their favourite shows; the Royal Bath & West Show this summer. We catch up with band member Tommy Banner to find out more.

The Wurzels are Somerset heroes – how did you get involved?

I’m not originally from Somerset – I was born eight miles outside Edinburgh. At school they used to take the mickey out of me for my country accent, so I fitted in quite easily with the Wurzels when I moved down. It was only meant to be for three months; 51 years later I’m still here. But it was a bit of a culture shock: I’d been playing on cruise ships and the band I was with wore made-to-measure Italian suits or full tails. Then I came down and was handed a pair of cords, wellies, a farmer’s working shirt and twine – to tie below your knees to stop creepy crawlies climbing up.

Who writes your songs and music?

Pete, Adge and I used to write three verses each, then our manager would pick which three he preferred – often it ended up being a verse from each of us. But we haven’t written anything new for a while because we’re so busy – and we don’t get the chance to play all the songs we’d like to play as we get requests for so many of our popular songs.

How many songs have you recorded?

I haven’t got a clue – it’s probably hundreds. And how many times have we played ‘Combine Harvester’? I don’t think my memory goes back that far! We once tried to leave it out of the play list and we got slated for it – we haven’t done that again.

What is your favourite Wurzels song?

I love playing a song which Pete wrote about Mevagissey – the accordion is quite prominent in it. Pete used to go on holidays there and loved the place so much he felt he had to write about it. I also love performing ‘Take me back to good old Somerset’, but we don’t get much chance to perform our really nice songs.

We also switched to doing parodies and cover versions of popular songs after appearing on Harry Hill’s TV show. We did three Barbara Streisand songs, ‘Don’t Look Back in Anger’ by Oasis and ‘Ruby’ by the Kaiser Chiefs, among others. That reached a different audience because they saw them on YouTube.

Who are your main fans these days?

We have a really modern audience – especially students who find us in their grandparents’ record collections. When they go away to study they realized how proud they are of where they’re born, and batter the ears of the students next door with Wurzels music. We hear that story dozens of times. We perform at Harper Adams University every year – have done for about 25 years – and some students treat it as a reunion; the atmosphere is brilliant.

How do city folk respond?

We perform at quite a lot of weddings, where one half of the audience are farmers’ sons or daughters and the other half are from London and don’t get what we’re about. But we eventually bludgeon them into having fun – we’ve never taken ourselves seriously, and if we’re enjoying ourselves then we hope the crowd will go with us, which they invariably do.

What has been your favourite gig?

Glastonbury in 2010. It was the third time we played at Glastonbury and we were on the Avalon stage – they had to close the field off because the crowd was so big. Normally they bank on having 3,000-4,000 in the crowd there, we had 28,000! Walking up the ramp onto the stage we just stopped to take in the noise and the sight – you couldn’t see a blade of grass and the atmosphere was incredible from the word go. Every one of us was so choked up we had to compose ourselves to do the show – Pete couldn’t say a word through the mic. We’d love to play the Sunday afternoon slot on the Pyramid Stage – I don’t have many ambitions left but that is one.

What about your strangest gig?

We had a great experience in Bahrain in the 1970s. The crowd were all seated, concert style, which we don’t like – and all the men were in full Arabic regalia. We weren’t sure what to expect, but it was really well received – we actually wondered if they were Brits all dressed up! It turns out lots of them had been students in Britain and had seen us, and were explaining all the songs to their neighbours. It was a magic night.

What can visitors to the Bath & West Show expect?

A good time! We’ve performed in the sheep shearing pavilion loads of times, and it’s a great atmosphere. I love the Show, and often come on other days just to look round. We performed there in 1976 when we reached number one in the charts with ‘Combine Harvester’. We had a van which you could blast music from, and we managed to get into the Grand Parade of livestock in the main ring – we never heard the end of that!

We last performed at the Show around 10 years ago, so it will be great to be back. I could probably do shout-outs to plenty of people in the crowd as we used to come every year. It’ll be a lovely thing to look forward to.

Were you always a musician?

I was scouted to be a professional football player in Scotland, and thought I might become a PE teacher. But I’ve played in bands since I was 12 and when I left school I saw a band looking for a keyboard player and went straight into rehearsals. After about five years I didn’t like what I was seeing in the entertainment business, so I did have a proper job for a couple of years.

I was a rep for a cosmetics company, and loved it, and then I sold furniture to stores across Scotland. One day I suggested we do a promotion on pianos – I said I would play for anyone who bought a piano. We sold 25 pianos in one weekend – one was to a ballroom with a nightclub. They invited me to the opening night and the keyboard player asked me to cover him for 15 minutes. It was the first time I’d played in public for two years, and I caught the bug again so went off to play the cruise ships.

I like young soloists like Ed Sheeran. My grandson is 12 and taking guitar lessons now so I keep up to date with him. We’re going on holiday with him and my daughter to Bude so we might have a little play together on my accordion.

You’ve been playing for years – why do you keep doing it?

The lead singer, drummer and I have a combined age of over 200 years! But we just enjoy playing. January is a quiet month and every one of us is bored to tears. We still do about 80 gigs a year – just the recovery time is longer. That’s the only time when I believe the date on my birth certificate!

What do you do to relax?

I watch rugby and football a lot – my elder grandson plays. I’ve always been very family orientated and have never had friends in the entertainment business – I don’t trust them. I support all the West Country teams, but am also a Hearts fan in Scotland.

Tommy Banner in a minute

What’s the last book you read?

Anything. I could live on Spanish tapas – I love them.

Lanzarote. I love the atmosphere there. My wife and I used to go every January – we always said that if we had the money to move abroad, we’d go there.

Something not may people know about you?

My age – until I dropped it on TV a few weeks ago!

I’ve got to say, being number one in the charts – we didn’t expect it at all.

Fruit: A bright future ahead despite labour concerns