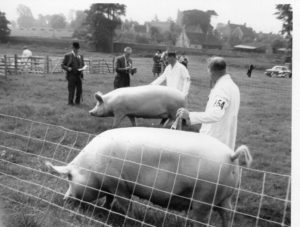 The Somerset Federation of Young Farmers’ Clubs celebrates its 85th birthday this year, and will be marking this special milestone at the Royal Bath & West Show – so what is it that has made the movement such a success and attracted generations of families to get involved?

One family have been members of the Young Farmers movement right from the start when the Portbury, Yatton and Nailsea group merged to form North Somerset YFC in 1932. One of the founding members was George Withers from Clapton-in-Gordano: Along with his twin brother, John, these 15-year olds were well-known throughout the YFC and the showing circuit. George’s special interest was Large White pigs, with which he had many showing successes, including at the Bath & West Show, which in earlier years moved location each year.

By 1938 there were over 1,000 members of Somerset YFC – and being in his twenties when WW2 broke out, George was a member in a time when rationing and petrol tokens were in force.  Members were only issued petrol tokens for meetings, not for dances, so to get around this the members arranged dances to follow meetings. George was a supporter of the branch long after he was too old to attend, and went on to become president of North Somerset YFC in 1988, remaining in the post for several years.

Although petrol tokens were long gone by the time his daughter Carol joined North Somerset YFC in 1962, aged 17, it was still uncommon to have a car. “We used to borrow our parents’ cars to get to meetings, or arrange lifts,” says Carol, who remained a member until she was married.

The classic saying about the YFC being the rural dating agency or marriage bureau is absolutely true with this family, as they have all met their partners through Young Farmers. Carol remembers she was encouraged to join after her parents thought her current boyfriend was unsuitable. “They thought I would find the right person in Young Farmers, and I obviously did,” she smiles.

She met her husband, Richard Gell, at North Somerset YFC. Their son, Andrew, duly followed in their footsteps, joining the club when he was 17 in 1985, playing an active role and remaining a member until the age limit of 26.

Likewise, Andrew’s wife, Sarah, was a member of Wrington & District YFC, the first club to be formed in Somerset, taking on many roles throughout her time in the club even after she and Andrew married in 1999. When away at college in Plymouth Sarah joined Devon club, Roborough, for a short time and was pleased that YFC was there to turn to. “I hated being away from home but joining the local club made me feel less homesick,” she says.

Both Andrew and Sarah now work at Alvis Contracting at Redhill, as does their son George (17) when he is not working at his apprenticeship placement or attending college. George attended his first county rally before he was a year old, as Sarah was rally treasurer. Although Carol remembers there was a time when women could not be chairman, by Sarah’s time things had changed, and she worked her way up through several roles before becoming chairman of Wrington YFC.

It seems that George’s sisters Amy (15) and Milly (12) are also set on becoming a members, too. “Amy went to Junior Camp in the Brecon Beacons last year and loved it,” says Sarah. “And they also enjoy showing sheep owned by their other grandparents, Robert and Naomi Harding, of Winford.”

The whole family have made friends for life through the YFC, with whom they still regularly meet up.  “One of the good things about young farmers is that it’s run by the members for the members – the advisory don’t get involved unless you want them to,” says George. “Club numbers do vary each year with people going to university or being out of age, but we’re optimistic about the future of our club.”

The meetings on the programme are much the same as in Carol’s day. Stock-judging, talks from companies, ten pin bowling and visits to local businesses to name a few, as well as practice in public speaking and sports. “Hockey was a big part of young farmers – we used to play on Sunday mornings on Weston sands,” says Carol. Hockey is something that has continued down the generations, with Sarah playing for Somerset YFC at South West Area weekends.

Young Farmers certainly becomes a big part of your life. “You could do something with Young Farmers every day of the week: Monday there would be a local meeting, Tuesday: Skittles, Wednesday: County meetings, Thursday; Entertainments practice and Friday and Saturday there would be dances in village halls,” says Andrew.

Now things are slightly different, explains George. “We don’t have as many regular dances and they aren’t in village halls, but the other elements remain.” The introduction of technology has certainly changed things massively. In Andrew’s day, events were listed on a monthly green newsletter, with further details obtained by calling people via the landline. “Now, social media is how we hear about what’s going on,” says George.

Young Farmers teaches members many practical life skills and the whole family agrees that you definitely get out what you put in, with membership increasing their confidence significantly, too. “You learn event organisation, business and finance skills,” says Andrew. “And it is totally inclusive – everyone and anyone can join whether they’re a farmer or not and they will be welcomed.”

The Somerset YFC marquee at the Show is themed around the 85th celebration, with current and ex young farmers encouraged to share their memories on a memory tree, which will bloom as the week goes on. A timeline will feature the locations of all the Royal Bath & West Shows, the dates YFC clubs were formed and landmark farming dates.