Heavy horses are always a fabulous sight at the Royal Bath & West Show – and this year visitors can expect a real spectacle with the introduction of a new class for teams of up to six. But what is it like to take the reins of six one-tonne giants? We speak to multiple champion David Mouland to find out.

“I like driving teams of six the best – it’s the biggest challenge,” he says. “For me, the pleasure goes up the more horses you have. But there’s all sorts that can go wrong with six – they can get too strong, and you only need one that doesn’t want to behave!”

David’s links with the Bath & West Show go back a long way – his father used to exhibit horses there as a boy. And David has also been competing and demonstrating heavy horses at the Show for many years.

“As a young lad I did a lot of work with heavy horses on my father’s farm – I remember driving them when I was six or seven years old,” he says. Although the farm was mechanised, his father competed Shires and Clydesdales in ploughing competitions, so was one of the last real carters.

“We would use a pony to lift the mangles as it was lighter, and then a horse to pull the cart back in,” reminisces David. “We’d take the silage out to the cows – the horse would walk up and down the field and we’d fork it out of the cart; we brought in the straw, and ploughed in the winter.”

One day David beat his father in a prestigious ploughing competition, which triggered a move to buy his own horses – Thomas and Prince. “They were Shire x Clydesdale – I wanted the body of the Clyde and the heart of the Shire, as Clydes are quite lazy.” 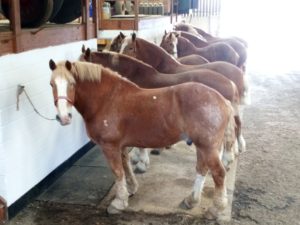 A third horse – Teddy – increased the team to three, and as he was only two or three years old David had to break him in.

“I put a harness on him and he towed a tyre down the track and back – he didn’t give a monkeys. One week later he was hitched to a cart. His first show was the Royal Show and we won the team of three class.”

In the following years David had many successes with everything from singles to teams of six, with 2009 proving a real highlight. But then tragedy struck. He lost one of his best horses to a brain tumour, and another to colic.

With heavy horses being very hard to find in the UK, he visited friends in Canada to source some new blood – and that was when he fell for the Belgian Draft.

“I went to Manitoba and the owner hooked up a team of four horses, aged two to five years old, to a sledge and drove them out to feed the stallions,” he smiles. “I drove them back in freezing snowy conditions – it was a fantastic day.”

After a few difficulties involving quarantine arrangements and the Iceland ash cloud, David and his wife Emma took delivery of the new four-horse team in March 2010.

“Our first show was the Devon County and they just blew my mind – they were fantastic. We went around all the shows that season and won everything, it was an absolutely brilliant time.”

In the coming years David built up his Belgian team and sold off his old Clydesdales and Shires – he now has 10 Belgian geldings on the 40-acre farm near Fordingbridge,

“The Belgians are like Ferraris compared to Minis – they’ve got so much power and if you aren’t careful you might get hurt,” says David. “With the Clydes you could lead six in from the field on a quad bike – you wouldn’t do that with one Belgian; you have to respect them at all times.” 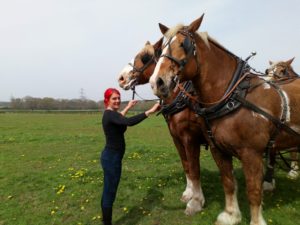 Feisty, yes, but these majestic beasts – which range from 19 hands high (193cm to the wither) to over 20hh (203cm) – are real characters as well. “They all have an individual paddock otherwise they play and take chunks out of each other and their halters,” laughs David.

“They’re great fun.” But they are good workers, too. “They love to learn. Shires and Clydes prefer to jog than walk or trot, but the Belgians do what you want.”

It’s therefore slightly surprising that there are so few of the breed in the UK. “There are 11 in this country – I own 10 of them and sold the 11th. But in North America there are more Belgians than any other heavy horses put together.”

The breed is popular among the Amish, and that is where David buys most of his stock. “They are brilliant with horses and they are very honest, nice people. If they say it’s well broken in then it will be.”

“I try and buy them at two to four years old as I want to get as many years out of them as I can,” says David. A decent animal will set him back $10,000 (£7,750), and then cost the same again to fly over to the UK, so the financials are not for the faint hearted.

“It costs £200 for a set of shoes as they have to be hand-made.” Then there’s the feed, bedding, enormous horse box with living quarters, full-time head groom and a travelling groom.

But the Moulands are not in this for the money. “I just love driving horses and showing people what we do,” says David. He runs a specialist transport company as his day job, while Emma keeps the horses fit and looks after their young daughter Maisy.

“I take them out every day in pairs, then if David comes home he’ll take out a four, and 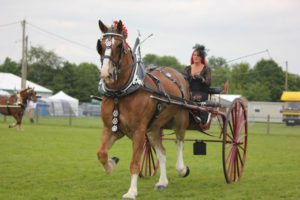 then a six at the weekend,” says Emma. About half are also broken to ride, so Emma will also be competing at the Bath & West Show in the increasingly popular ridden classes.

The couple compete in about 10-15 shows a year, host open days, and occasionally help out with horse-drawn transport for local weddings or funerals. With a string of showing successes behind them, they are really looking forward to the new competition at the Bath & West Show – but what will the judge be looking for?

“When I’m judging, the first thing I’m looking for is the horse, how well it moves and how much it wants to do the job,” says David. “Then I’m looking at conformation and finally turnout. We spend hours polishing the harnesses over the winter.”

Like many summer competitors, the horses get a break over the winter, and are then brought back into work in the spring. “When they are learning you swap them around so they will go in any position – although there are positions they like best,” explains David.

“My best pair are both leaders – I have to split them up when exercising them at home otherwise they pull my arms out, but as soon as they’re in the ring they just know the job and get on with it. They’re fantastic.”

Get inspired by engineering at the Bath & West Show