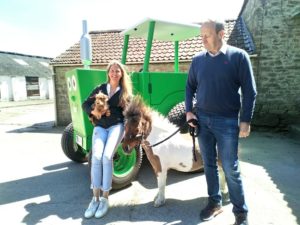 He’s the nation’s favourite little green tractor, and visitors to the Royal Bath & West Show can meet him in person: Look out for Tractor Ted! But this endearing little character has his roots firmly in farming, being the brainchild of Somerset farmer David Horler. We pay him a visit.

How did Tractor Ted come about?

My business partner Alexandra Heard had young children who loved watching big machinery working on the farm, and she realised that there was nothing with real live action for them to watch on television. I also had young children at the time, so using the farm as a base we started making videos.

We just looked in Yellow Pages for cameras and so on – initially, in 2002, we didn’t have the Tractor Ted character, it was just live action with a theme; how to make bread, for example. We then thought it would be nice to have a character who narrates the stories and gets in the way for a bit more fun. He’s eight years old and very knowledgeable, but he doesn’t know everything.

What about the other characters?

Farmer Tom is the font of all knowledge, Midge the dog is cheeky and Les is the grandfather figure – he used to work on the farm here but is retired now. The kids just adore him and mob him at events. We’ve also brought in Merlin the pony to attract a few more girls. Our demographic is for children aged 18 months to six years, although older kids still like to watch it nostalgically.

Is it still a working farm?

Absolutely. My grandfather came here to Highchurch Farm, Radstock, in 1930 and the family has been here ever since – I was born here. My father was a keen Ayrshire breeder and used to show at the Bath & West Show for years. But we quit dairying in the 1980s when milk quota came in, and now we have 45 Continental cross suckler cows and an arable rotation. We finish all the beef stock on red clover silage, with no concentrates, and grow three years of clover leys followed by wheat and oats.

We’ve got 600 acres and are now organic: I was approached 12 years ago by the Soil Association to make ‘Tractor Ted goes organic’. I don’t want to preach organic, so all he did was visit organic farms. But I liked what I saw and decided to go organic here – and I love it; it’s a lot simpler.

How do you balance farming and Tractor Ted?

If we go to Tractor Ted meetings sometimes we’ll stop off on the way home to buy some cattle – and everyone who works here tends to get a farm initiation. My time is probably now 90% Tractor Ted and 10% farming, although it varies according to the time of year.

Farmer Tom (Wheeler) is actually my nephew, and as I got busier with Tractor Ted he said he’d oversee the planting and calving. As he was around so much he got involved with the filming, and his own children have been in the films, too. We use filming contractors and an editing team, and Alexandra writes the books and directs the films.

You can’t plan anything around the weather, so when it’s good we want to be filming – but of course that’s when we want to be farming, too. It can take two days of filming just to get 10 minutes of footage.

How true to life are the videos?

We have a very strong rural following so it must be factually correct. But we also work with magazines and radio to attract city kids, too, and are currently looking at working with a city farm.

For me, it’s very satisfying that we’re teaching people about farming, the countryside and where their food comes from. But we don’t like the word ‘education’ – to us, it’s ‘Teducation’; it needs to be fun and engaging. It’s also real-life footage, so there’s so much going on that you can watch them again and again. It’s one of the few children’s programmes you can actually enjoy sitting down to watch with your kids.

We film all over the country, whether it’s about laying tracks, putting buildings up, working diggers, or how a tractor is made. We’re very well supported by machinery dealers at events, and have hands-on, interactive displays at our Tractor Ted events. We also get quite a few farmers phoning us up and asking if we want to film some new big machine they’ve just bought!

How much has the business grown?

We started out by making 500 videos and advertising them in Farmers Weekly. We sold them all in the first week, which gave us the confidence that it would work. So we found a small workshop on the farm and packed a few videos – every year it grew, but it’s all been organic growth, we haven’t done masses of advertising. And that’s amazing, because it’s the love of the kids, parents and grandparents which has really driven it.

We now sell books, T-shirts and other merchandise, and it just keeps growing: We’ve sold over 1m DVDs now and are in 500 independent retailers. We did over 100 days of events last year, at our own shows, county shows, farm parks and shops, as well as over 70 cinema screenings. We’ve got 10 staff and an events team of 10-12 people, with everything based here on the farm.

What are you doing at the Bath & West Show?

It’s our local show, so it’s really important for us to support it. We’ve got a bouncy castle, digger den, a driving track, welly wanging, chuck-a-chicken, an activity trail and a cinema screening. It’s a really nice area where parents can come and relax while the kids have fun.

We’ve also brought out a new song: ‘It’s Tractor Ted Time’, and we’re doing a dance with children on the main lawn. In addition, we’re bringing our life-size, fully-working Tractor Ted to drive about, which the kids just love – he’s like the Pied Piper at events! He was designed by engineering students at Lackham College last year – they’re exhibiting in the Imagineering Tent – and he’s just brilliant.

What’s next for Tractor Ted?

We’ve filmed 24 DVDs so we’re always trying to find new things to cover – the new DVD, ‘Juicy Squeezy’ is all about growing blackcurrants for squash drinks.

Around 18 months ago we brought in two new investors, who have looked at things with fresh eyes. We’ve done a soft rebrand with a fresh theme tune and dance routine with simple moves that kids can dance to. We’re also doing more story boarding and structure so we can potentially look at broadcasting deals in the future.

The DVDs used to be 40 minutes long, but we’ve changed that to 10 minutes to fit in with broadcasting, so they’re more bite-sized and focussed. But they all have the big machines, characters and storylines. It would be the icing on the cake to get a broadcasting deal.