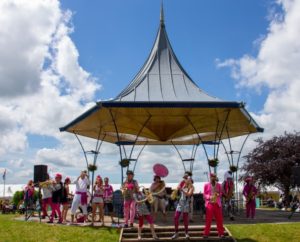 There’s just one day to go until the Royal Bath & West Show opens its doors – but what goes into making an event of this kind such a success? We take a look at some key figures and behind-the-scenes activity.

“Planning starts years in advance,” explains head of shows Alan Lyons. “We have a team of 24 full-time staff, steered by an esteemed board of trustees and individual committees which oversee the many varied sections of the Show.”

Guided by visitor and exhibitor feedback, the Show team also visit other events to get inspiration for main show acts and features – like this year’s heart-stopping FMX Bike Battle – while keeping the Society’s charitable values and West Country character at its heart.

In recent years the Society has replaced generic food stalls with high quality, West Country fare, introduced a festival feel with an area for live music, extended the entertainment into the evening and opened an on-site campsite for those wishing to stay over.

Livestock exhibitors haven’t missed out, either, with the opening of the new 500-seat restaurant in the remodelled Wessex Pavilion just last month, where they will be entertained with the sociable Showman’s Supper.

So what can visitors get to see at the 156th Royal Bath & West Show? Here is a glimpse of the show in figures:

If that’s not enough to whet your appetite, here’s a peak at what else is on. Why not take a ride on the enchanting miniature railway, meet television presenter and Cotswold Farm Park owner Adam Henson, sing along to The Wurzels, or enjoy a dose of adrenaline on the 4×4 off-road course?

For younger visitors, take a trip to the Tractor Ted fun zone, head over to Farming for the Family to see chicks hatching or learn how to milk a cow. And don’t miss the UK’s number one Take That tribute band, Rule the World, who will be playing on Wednesday afternoon.

Dog lovers should stop by at the Great British Dogs feature, while budding engineers can while away hours taking part in activities at the Imagineering Fair. Or for quieter moments, settle down with some local food and drink and soak up the ambience on the idyllic Main Lawn and bandstand.

“The Royal Bath & West Show is a true celebration of Great British agriculture, entertainment, food and drink,” says Mr Lyons. “With over 50 hours of entertainment every day, there really is something for everyone, and we look forward to welcoming you to the event this week.”