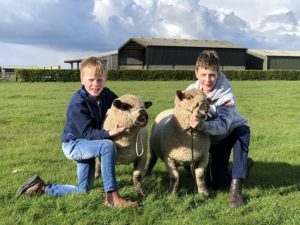 Exhibiting livestock is a huge part of the Royal Bath & West Show and many families have been showing there for generations. We catch up with the Stamp family, who have been involved with the Show for 18 years.

Stephen Stamp started showing livestock at just 10 years old, and both he and his wife Rachel have certainly passed on their love of showing to their sons, Harry and Archie, who are undoubtedly stars of the future and have got the rosettes to prove it.

Stephen and Rachel are both chief sheep stewards at the Bath & West Show, and Harry showed his first sheep there aged three: It was a memorable moment for the family. When asked by the judge what the breed the lamb was, he dutifully and firmly replied, “Texel cross Suffolk.” He went on to win overall handler that year.

Now aged nine, he has his own flock of 30 Dorset Downs, which he chose from the Dorset Down breed sale three years ago. He opted for this breed having helped another owner to exhibit at the Show. “Dorsets are easier to handle and finish well on grass,” explains Stephen.

The family farm 300 acres in partnership with Rachel’s father Maurice Wall at Bowbridge Farm, Highbridge, Somerset where they keep 50 Texel sheep along with 200 pedigree Aberdeen Angus and North Devon cattle. These are sold to local farm shops and pubs, with any surplus going to ABP or local markets.

“Lambing of the Dorset Downs takes place inside from December to January and the Texels from January to March, generally with a lambing percentage of 175%,” Rachel explains. “Any finished lambs will be sold through Exeter market, and we aim for a live weight of 40-45kg.”

2018 was a big year for Harry as he won just about everything he entered. “We won’t see another year like that,” laughs Rachel. “One of his greatest achievements was winning Best Stockperson under 16 years of age at the National Young Stars competition at Three Counties Showground last year.”

Harry’s other successes included winning Breed Championships at Dunster, Devon County, Melplash and Mid Somerset shows, along with claiming the reserve champion at Honiton Show. The family also won supreme pedigree beef champion at the English Fair in 2018. Archie had his share of success, as he won Champion Young Sheep Handler at Gillingham and Shaftesbury Show as well as supreme champion at Frome Christmas Fatstock Show with a British Blue heifer in partnership with his friend Percy Clatworthy.

But what happens when the boys are competing against each other? “Harry normally wins because of the cuteness factor,” laughs Archie.

So what does it take to produce a show worthy sheep? “It starts at the breeding, making sure you have a good tup and type of sheep,” explains Stephen. “You want the right bloodlines and something that’s going to catch the judge’s eye.”

Preparation can take up to eight hours, even though the Dorset Downs aren’t washed, to preserve their natural colour. And Harry is involved with the process from start to finish. “We will compete in seven or eight shows throughout the summer, as well as numerous other shows throughout the year,” says Stephen.  “Harry does 80% of the clipping, I just go in and tidy them up.”

So what will the judges be looking for? “Breed characteristics, good frame, length, width and depth, conformation, loin and teeth – none of this is based on the preparation you’ve done – a good judge will see through that.”

As if farming, showing and raising two enterprising children isn’t enough for the Stamps they both have jobs too. “I work full-time as a senior advisor for the Environment Agency and Rachel is part-time for Old Mill Accountants; we both take a week off for the Bath & West Show,” explains Stephen. “We treat it like a family holiday – we do it because we love it.”