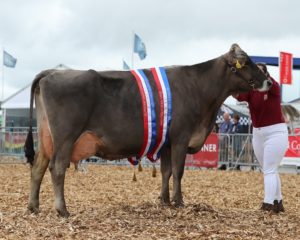 Top class livestock fought it out for top honours at the Royal Bath & West Show this week, with a local farmer taking the sought after dairy supreme championship.

Victoria Dimond, based near Mark in Somerset, claimed supreme dairy champion with her Brown Swiss cow, in her first show back after a break. The senior cow, Kedar Princess Cleopatra, was bred by Jonny Lochead. “She’s had three calves, the last on 20 February, and I bought her as a freshly calved heifer, sired by Prince and out of Kedar Hupoly Christi 4. She’s yielding 48 litres at the moment,” explained Miss Dimond.

“We have just under 100 cows; 35 pure Brown Swiss, 48 Jersey and the rest British Friesian. Cleopatra won breed champion at North Somerset this year and we’ll be off to mid-Devon and some local shows next.”

Miss Dimond has been showing since she was little and finds it very therapeutic.  “I really struggled with depression and my mental health, so I took four years off. But showing helps and I can go out and talk to my cows.”

The Dexter National Breed Show took place during the Bath & West this year, with Abbie Digweed taking the breed championship with her cow, Tooloos Freesia. “She’s on her third calf; the last one she had was just five weeks ago – we’ve named her calf Mayflower.”

Mrs Digweed, her husband Les and her son Tommy are from Chipping Camden in the Cotswolds, where they keep 20 Dexter cows. “Freesia is homebred – sired by Wise Harris Hawk and part of our foundation stock. We will be going to Three Counties Show next.”

Over in the beef ring, British Charolais heifer Cove Nigella won the interbreed championship. Owned by Clare Clapp and shown by Paul Walker, stockman for the Red Linhay herd, this homebred heifer was sired by Davally Illusion and out of Esgob Honeysuckle, and has had success in the season already. “She came reserve champion at Devon County Show,” said Mrs Clapp. “I’m in absolute shock, but it’s lovely to win.”

Down in the sheep lines, Graham Burrough from Dunkeswell, Honiton, took the champion spot with his Charollais shearling ewe. “She’s homebred and came champion at Devon County too; we will be going to Royal Cornwall next week,” said Mr Burrough.

Reserve champion was David Bradley Farmer, with his Texel shearling ewe, on their first outing down from Dumfries. Mr Bradley Farmer bought the ewe from Lanarkshire-based Robert Cockburn and will be off to Biggar Show next.

In the poultry section, Robert Davies took top honours with his barred Wyandotte female, with reserve spot going to Jane Freeman’s male Vorwerk. A great entry of eggs saw Paula Guley scoop the champion prize, with six large fowl eggs of any other colour, while Joe and Sophie Merchant were placed in reserve position with six turkey eggs.

Get inspired by engineering at the Bath & West Show