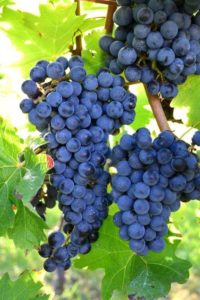 Wine producers could significantly boost grape health, yield and taste by adopting an holistic approach to soil and foliar nutrition.

Olmix-Micromix introduced its full SAGA range to the UK this month, offering a complete package of plant care with scientifically proven benefits.

With foliar nutrition, biostimulants and soil improvers now available to British producers, they can improve productivity and taste, while also protecting against stresses like drought.

“From the biological soil activator Geo2 – which speeds up the production of organic matter and improves soil structure – to SeaMel Prevent, which alleviates stress at fruiting – growers have a full package of crop care at their disposal.”

The SAGA programme was designed to answer the sustainability challenges facing producers, which are only likely to grow in the coming years.

“Translated, the acronym stands for ‘Alternative Solutions, Thanks to Algae’ – and the aim is to help farmers rear livestock without antibiotics and crops without fungicides,” explains Mr Gamble.

“The protocol is based on strengthening and boosting immunity thanks to scientifically proven algae extracts – and in France Olmix has taken the theory right from field to fork with its own restaurant serving SAGA produce.” 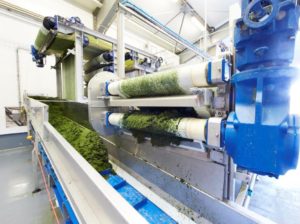 All products are certified for organic use, but can also be used in complementary ways with conventional chemistry. In vines, SeaMel Booster can be used at leaf emergence to enhance photosynthesis and encourage root hair development to get the plant off to the best possible start.

AgrOptim Sunset can be used throughout the season to deliver essential micronutrients, while SeaMel Prevent should be applied at early flowering and fruit set to reduce stress and produce more homogenous crops.

SeaMel Bloom contains a mix of minerals, amino acids and biostimulants to improve protein synthesis and strengthen cell walls throughout flowering and fruit set, boosting berry weight by 13% and reducing millerandage by 18% against the control in trials.

Finally, SeaMel Barricade can be applied at bunch closure and ripening to strengthen cell walls and protect against damage.

“For years, copper has been used to do this job, but it is very toxic and accumulates in the soil, significantly reducing microbial diversity,” says Mr Gamble.

“Barricade contains much less copper, which is processed to allow very efficient tissue strengthening. It’s formulated to stick to the leaves, reducing the risk of accumulation in the soil while ensuring healthier, stronger crops.”

With plant protection products under increasing scrutiny and restriction, farmers are rightly looking at options to replace them, he adds.

“The science behind biostimulants and foliar nutrition is incredibly robust, and the trial results speak for themselves. Whether you opt for the full SAGA programme or a pick-and-mix approach with other chemistry, the time is ripe for change.”

What the research shows

In a three-year trial carried out by the Var Chamber of Agriculture in France, the use of Geo2 and AgrOptim Sunset foliar biostimulant yielded an impressive range of benefits.

Conducted on three randomised blocks of Grenache in the Cotes de Provence, the trial sites were treated with 300kg/ha of soil improver each autumn, with the biostimulant applied six times over the growing season. Both the trial and the control plots also received an organic fertiliser (3.6.18 +S4) at 1t/ha in March each year. 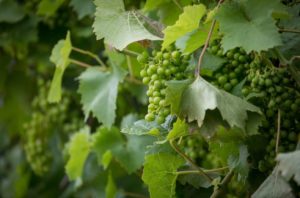 The weight of 200 berries was checked each season, and was 10% higher on average, with no difference in maturity. Overall yield was 13% up, at 1.73kg/vine, with pruning wood 17% heavier, at 26g, indicating better plant reserves.

At the end of the trial, trenches were dug to assess the soil profile: In the control plot the soil was compacted, with roots reaching 25cm deep and many growing horizontally.

In contrast, the treated soil was more aerated, with the root tissue being more robust and growing down to a depth of 60cm – enabling the vines to access more water and nutrients from the soil.

Of course, wine is not all about quantity, so the resulting wine was blind taste tested two years running by 12 professionals at the Rosé Centre.

In the first year, the jury said the treated wine had significantly more olfactory intensity and much higher aromatic quality, with the second year revealing it had more red fruit, citrus and passion fruit flavour. In both years they preferred the treated wine as being softer and fruitier.

Trimble campaigns to donate up to $100,000 to She Feeds the World