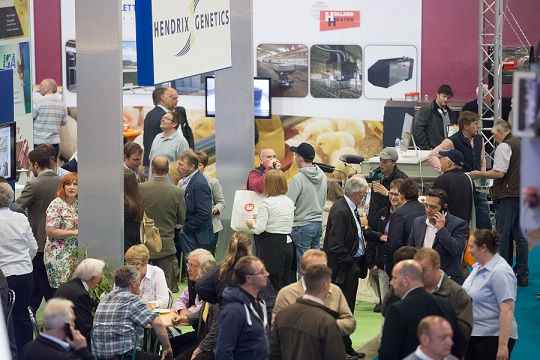 Accessing the latest innovations, networking and ideas are the most valuable aspects of the Pig & Poultry Fair for producers, and the 2020 Fair is lined-up to deliver them in abundance.

Both the pig and poultry industries are no strangers to evolving with the times, but now more than ever there is enormous pressure on farmers to change and adapt to meet consumer and environmental demands, says event organiser, Alice Bell. “The 2020 Pig & Poultry Fair is a two-day tool-box aimed at providing producers with everything they need for their businesses to flourish.”

The Fair is a great place to hear from experts, speak to other producers and identify the best new strategies and technologies, according to James Mottershead, a poultry producer with 215,000 broilers in Shropshire.

“Visiting the Fair is a great opportunity to have a look round, engage with new technology, meet like-minded people and catch up with the whole team of people we deal with,” says Mr Mottershead.

“As things change we have to pick peoples’ brains to get new ideas so we can go home and implement them,” he adds.

The networking opportunities are also paramount for Jonty Hay, a broiler grower from Herefordshire produces 30 million birds. “The most important part for me is the networking; everyone is there. I have a list of people I want to see – including the people I don’t deal with or see on a day to day basis.”

The representation of supermarkets at the Fair is an important aspect of the event for Mr Hay. “I like catching up with the likes of Tesco, Sainsbury’s, and Marks and Spencer – to make sure we’re all singing from the same hymn sheet.”

Mr Hay will be on the lookout for the latest poultry technologies. “We are in the process of reinvesting in atmospheric and environmental controls in our sheds.”

The Fair has just as much to offer pig producers and Stephen Thompson who operates a batch farrowing business with his family in Sheffield, is keen to view the shed construction options at the event as he wants to replace their fattening sheds. “We will look at what’s going to go into this building at the Fair,” he says. “Every year we invest in the buildings because you can’t afford not to.”

Stephen will be looking for products to develop the farrowing accommodation. “We use a lot of milk and are hand mixing at the moment, so mechanisation will be timesaving and reduce labour.”

The chance to be inspired with new ideas is one of the biggest draws of the Fair for Charlie Thompson, who produces pedigree pigs from his 650 strong sow herd in Northampton. “We changed our washing and disinfecting system to the MS Schippers Greenline system after attending the Fair; it makes it very easy for our staff to use as it applies the disinfectant and detergent at the correct dilution,” says Mr Thompson.

“This year we will be looking at the slurry management and new ideas for fulfilling the welfare code at the Fair. It’s a good chance to see a lot of suppliers in one place and get hands-on with the equipment.”

Whether it is the latest technology to boost efficiency or sharing ideas with likeminded farmers investing time in a day at the Fair really is invaluable for every pig and poultry business, says Ms Bell. “The event is guaranteed to provide plenty to think about and take home to implement on farm.”

The British Pig and Poultry Fair is the leading event for the UK pig, poultry and egg sectors, and will be held on 12-13 May 2020 at Stoneleigh, Warwickshire. The Fair is free to attend, for registration visit www.pigandpoultry.org.uk

Boost margins from below the ground at Cereals