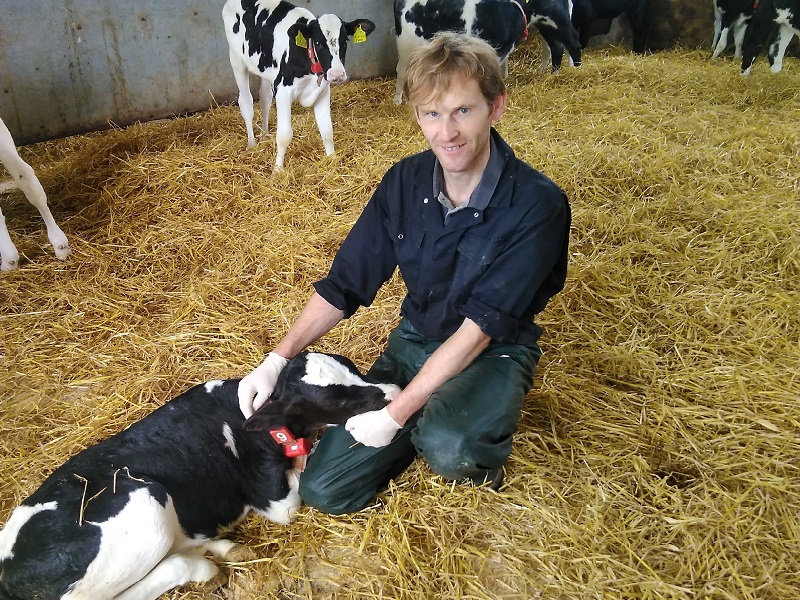 Vaccinating calves against Mycoplasma bovis significantly reduces post-weaning mortality and antibiotic use, according to results from an independent farm-based trial.

The trial, which looked at growth rates, mortality and antimicrobial usage for 1582 calves born into eight herds in Scotland, considered the efficacy of a new multi-strain vaccine imported from the US.

“Although the vaccine has proven effective after its recent introduction to the US market, this is the first time we’ve been able to use it in the UK,” explains Graeme Fowlie at Meadows Vets, which secured the import license with the help of Dutch pharmaceutical firm Kernfarm.

Mycoplasma bovis has recently become the most common cause of bovine respiratory disease – particularly pneumonia in calves – with other symptoms including mastitis, arthritis and otitis. And it is notoriously difficult to treat. “It doesn’t respond to most common antibiotics, so prevention is definitely better than cure – but until now the only vaccine available has been a bespoke autogenous one,” says Mr Fowlie.

Given the multi-strain vaccine is new to the UK market, he organised a set of trials in Scotland to see how it would work in a real farm environment (see panel). And the results have been impressive: In total, weaned calf mortality fell from 5.8% pre-vaccination to 0.4% post-vaccination, whereas it remained relatively unchanged on control farms at 7.3-7.8% (see graph). 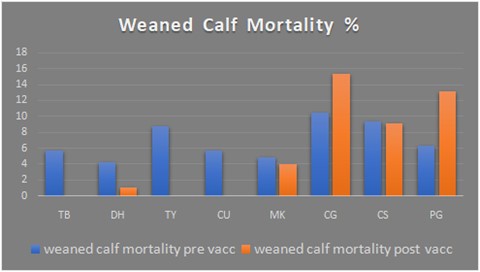 Due to inconsistent farm records, it was not possible to isolate mortality due to suspected pneumonia, so records for all mortality causes were used.

Pre-weaning mortality increased slightly on treated farms, as one had an outbreak of cryptosporidium and two had problems with colostrum yield and quality. Overall calf mortality up to 200 days therefore fell from 8.6% pre-vaccination to 4.3% afterwards, while it remained fairly static at 10.6-11.1% on control farms.

Antibiotic usage also dropped sharply among the trial farms, from an average of 116.9 PCU (population correction unit) per 100kg liveweight before vaccination to just 41.45 PCU/100kg afterwards. In contrast, usage on the control farms increased from 67.42 PCU/100kg to 78.99 over the same time period (see graph). 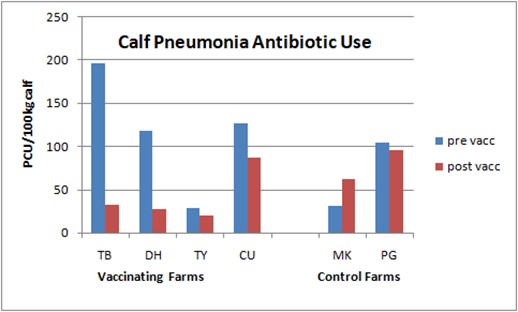 There was no significant difference between liveweight gains recorded pre or post-vaccination.

“These results are extremely encouraging,” says Mr Fowlie. “Although they are only broadly suggestive of the vaccine’s efficacy – given the study design in a commercial setting – the results do prove the concept of using the vaccine on British farms.

“Further work is warranted for full scientific results, but I’m really excited that we finally have another tool in the box, which is immediately available, to fight against this insidious disease.”

Each of the four dairy herds had proven Mycoplasma bovis prevalence, and were compared to four control herds. The herds ranged from 140 to 280 Holstein cows, were year-round calving, and bucket-reared calves on straw pens. Each – bar two of the control farms – vaccinated against calf pneumonia using Rispoval Intranasal and / or Hipra Bovis Somni – and also vaccinated dry cows with a routine Rotavec Corona vaccine.

All were monitored from October 2018 to March / April 2019 before the trial began, with calves up to 200 days old weighed and recorded. From May 2019 until September / October 2019 the trial farms then vaccinated cows with the M. Bovis vaccine at least four weeks pre-calving.

Calves were fed the dam’s colostrum as per each farm’s usual management system, and then received a booster M. Bovis vaccine at about 60 days old. However, mid-study this age was reduced to about 28 days, after calves at one farm showed mild clinical signs of M. Bovis at six-seven weeks of age.

In addition to the standard vaccine, two farms in the trial also chose to vaccinate all lactating cows, while a third administered a second vaccine to weaned calves between two and eight months old in May 2018 to reduce chronic pneumonia in the group. All calves born into the trial were weighed and recorded, with antibiotic usage also calculated.

Align technology and objectives to make the most of grants