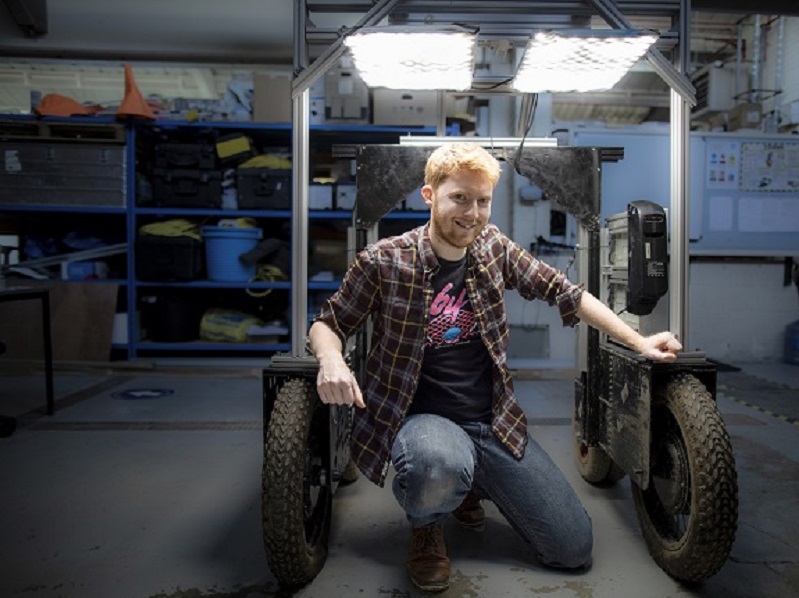 Agricultural robots have gained in popularity as farmers increasingly turn to technologies that make their processes easier and more efficient. But they often come with a hefty price tag – until now. Enter Robotriks, a company founded on making robots affordable.

In a project funded by Agri-tech Cornwall and a £12,967 innovation grant from the Cornwall Development Company, Robotriks has created an autonomous platform which can be built at low cost and, within a few hours, is ready to get to work.

“The aim is to create a system which is affordable and reliable,” says Jake Shaw-Sutton, director at Robotriks. The Robotriks Traction Unit (RTU) costs just £7,000 – almost a tenth of the cost of most others on the market.

One of the main challenges the RTU addresses is lack of manual labour on farms. “It’s not about taking away jobs, it’s about filling jobs where there currently are no people available to do them,” says Mr Shaw-Sutton, who is also a senior robotics technician at the University of Plymouth. “For a while there have been fewer people willing to go out into the fields and harvest fruit and vegetables; this is an autonomous solution to that.”

And there are cost savings too. “Even with the current cost of the unit, which we’re always trying to improve, it still works out cheaper than having someone employed on minimum wage – it can work for more hours, not needing lunch breaks or to sleep at night.”

Mr Shaw-Sutton and his co-founder Khaian Marsh both grew up on farms, so the RTU has been put through its paces in real life situations, including testing for soil compaction. “There’s a small module with sensors which bolts onto the side of the RTU; when it is pushed into the soil it can measure the force needed as well as moisture, and because it is on the RTU the data is processed there and then,” says Mr Shaw-Sutton.

The unit comprises a large drive wheel, suspension and a computer system, held together by galvanised pipe – on which farmers can attach pretty much any implement. This includes conventional items such as a tow hitch, wheelbarrow or grass cutter, but also more high-tech and new devices including soil probes, robotic harvesting arms or depth cameras for 3D crop rendering.

The component parts are all mass produced rather than specialist, which brings the costs down – for example the wheel’s brushless hub motor is from an electric bike. “The unit is fully adjustable to any height and width; some farms may have narrow paths, for example in fruit and vegetables, or it might need to go wider to get over tall crops,” he explains.

The RTU works either by remote control or autonomously. “We’re trying to make it as simple as possible. We currently have three options; the first uses a remote control to drive the unit to a location, mark it as a point, drive to the next position and mark another point – then it will keep driving between those points.

“The second uses an online map, which appears on a display with the current location. The operator can click where they want to send the unit and it will go there.”

The third, which is still under development, features full autonomous control. “It is managed by drones. The positioning system on board the RTU is known as Real Time Kinematic (RTK) and allows for centimetre level precision from satellites. It is also the same system used by DJI Drones – the camera on board then gives a bird’s eye view, and their coordinate frames can be easily matched,” explains Mr Shaw-Sutton.

“The drone’s vision works on multispectral colour which features visible and infrared light, for example it may see the field as green and a patch of weeds as yellow – it can then send a coordinate to the RTU and instruct it over to spray off the patch of weeds.”

In terms of safety, there are emergency stop buttons on the unit and a remote kill switch. “In autonomous mode that’s where all the sensors and cameras come into play, if it gets too close to anything it will stop.”

All data is processed locally, on board the RTU. “That was a decision we made after speaking with farmers; they wanted to know that only they had access to their data and it wasn’t going off to the cloud.”

The unit can carry several hundred kilos and is limited to run at up to 10mph, matching walking or running pace. It has the ability to tow or mount just about any equipment needed – making it extremely versatile and cost effective. “It can be used for a range of things from crop monitoring to harvesting crops like cauliflowers,” he adds.

It is powered by batteries, which last for 24 hours. “Currently you just plug in to charge it, but we are considering having a docking station, because all of the power can be harvested from a single solar panel.”

Although the RTU is still in the testing phase, it is being offered commercially to researchers and they hope it will have enough functionality to offer to a wider market over the next year.

Robotriks is part of a cluster of exciting technology companies emerging at the University of Plymouth in conjunction with the Agri-Tech Cornwall project.

That includes Fieldwork Robotics, a spinout launched to commercialise a series of robot crop-harvesting technology which is currently valued in excess of £5million.

Yve Metcalfe-Tyrrell, Agri-Tech project manager at the University, says: “This is technology being demanded by industry, and the South West is at the forefront of meeting that demand. The University has a long track record in robotics and we are now applying that in ways which have the potential to transform the future of agriculture.

“We have been working closely with Robotriks to enable them to develop and this is only the start. Together with other emerging companies, their growth can create a cluster of excellence that positions the South West as the epicentre of agricultural and technological innovation.”