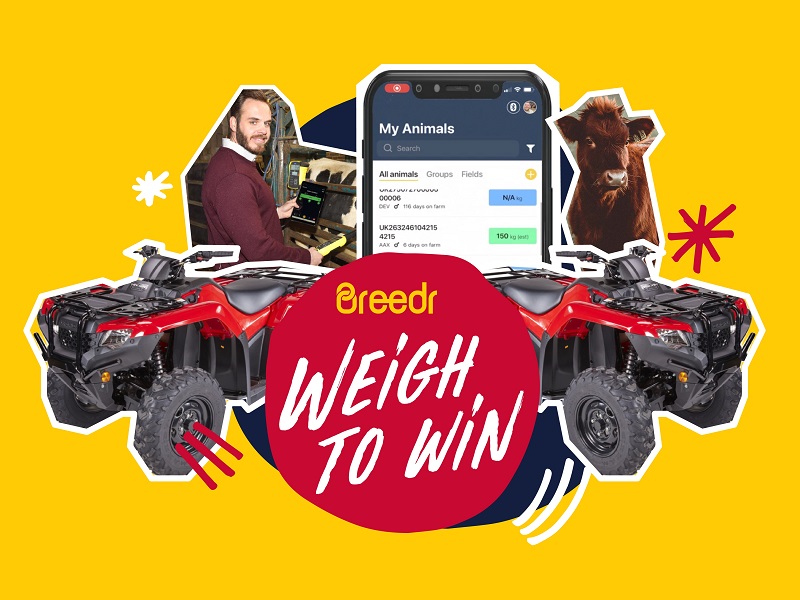 Two young farmers are achieving outstanding growth rates to top Breedr’s Weigh to Win leader board, so what’s their secret? We speak to them to find out their top tips.

Calf rearer Laura Awdry is achieving an impressive Daily Live Weight Gain (DLWG) of 1.04kg in cattle under 12 months, at Pinkney Farm in Wiltshire. Mrs Awdry (32) and her husband Sam aim to buy in 350 Aberdeen Angus cross dairy calves a year to rear for their own beef herd or to sell to local farmers. Buying them from an autumn block calving herd at two weeks old, they rear the calves for 80 days until they are around 120kg.

Mrs Awdry has been regularly weighing the calves since August 2020. “The key with using Breedr is accessing the calf data straight away; how old they are and their DLWG. We weigh pre-weaning and post-weaning, then a few weeks after that – so three times in their young lifetime.”

So what has contributed to Mrs Awdry’s success? “The calves have just been weaned, so they’re in a transition from milk to cake. While any feed transition can inhibit growth rates, we were able to keep them on the same milk powder at the same concentration. This means they weren’t knocked by a change in diet – and I think the fact all the calves are from one farm helps,” she says.

One big benefit of regularly weighing is being able to pick up on issues which might be holding back performance. “It might be an animal which looked okay by eye but their DLWG is terrible, so there could be an underlying issue – or it could be a poor performing calf which is costing you money,” explains Mrs Awdry.

“Being at the top of the leader board is really rewarding – it shows that we’ve taken the right steps to keep those consistent weights, it’s nice to have a pat on the back.”

Topping the December leader board in the over 12-month category is 25-year-old Ed Brown at Clapham Farm, East Sussex. Mr Brown runs a suckler herd of 170 cattle, split into spring and autumn calving blocks, and intensively finishes young bulls and heifers – either bought in or bred on farm, on an ad-lib barley finishing ration. The intensive system is primarily geared towards young bulls, of which he finishes around 120 a year. He is currently averaging a DLWG of 0.94kg.

“We have two Salers bulls, one South Devon bull and one Basadaise bull. All the Basadaise calves are terminal animals, whereas we keep some Salers and South Devon cross calves for breeding.”

Mr Brown began using Breedr in the summer of 2020 with a plan to implement it fully for the autumn calves. “We normally weigh at weaning and then every two to three weeks; we weigh to see how they’re performing – with the bulls we’re normally trying to push them to 700kg liveweight,” he says.

Having previously used an excel spreadsheet to record weights, Mr Brown wanted to streamline the process. “Our old process was very labour intensive, we had to print out a spreadsheet with all the numbers on and then write all the weights down – it was a slow process.

“Using Breedr is a lot easier for keeping track of everything, it is all in one place rather than across a range of spreadsheets.”

All the finished animals go to ABP in Guildford or into the farm’s meat box scheme, which allows Mr Brown to monitor the different breeds. “The Basadaise calves have double muscling and grow quickly but they kill out at a much higher percentage, so we push them to a lower weight of 650kg.”

Through Breedr he can also keep an eye on the best genetics. “If one animal has shown good growth throughout and has the right build we will keep the bull for breeding – it’s a good way of keeping track and knowing it has grown well off our system.”

So what does he put the good growth rates down to? “I think they’re on a good ration and they were weaned slowly onto the ad-lib barley. We’re cautious about how we get them onto the ration because of the risk of acidosis, so we up the rate very slowly – they’re now on a full ration of 10kg a day. They also have plenty of space in the barn and they have a good weighing routine.”

The breeding also helps, says Mr Brown. “Because they are Basadaise cross they thrive on grain with double muscled growth.”

Investment for efficiency at the Midlands Machinery Show