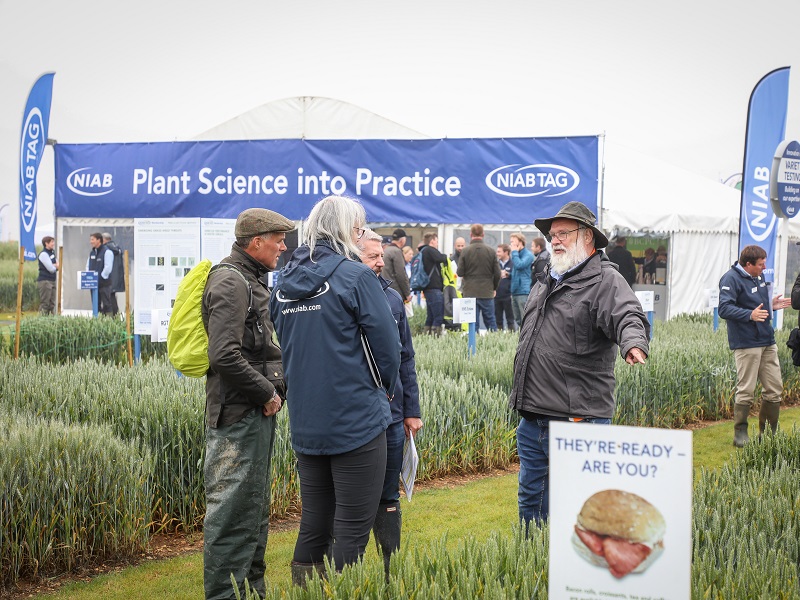 Variety choice can make or break a profitable year, so growers need to feel confident when introducing any new variety to the rotation. At the Cereals Event (30 June – 1 July) in Lincolnshire, growers can gain valuable insight into the latest genetics to reach the market.

At the very heart of the Cereals Event are the crop plots, featuring 314 plots including listed and candidate varieties on AHDB’s latest Recommended Lists (RL) – supplied and exhibited by a wide range of exhibitors. Growers will be able to see treated and untreated plots of winter and spring wheat and barley, oilseed rape, linseed, maize and herbage, as well as more niche crops like borage, rye, red wheat and naked oats.

Exhibitors’ variety demonstration plots are always a popular attraction, showcasing the latest in crop breeding and protection methods – and it is the ability to physically see the growing crops that really piques visitors’ interest.

“Resilience has been high on the agenda for growers –with yellow rust and Septoria resistance a key part of this,” says Clare Leaman, cereal variety specialist at NIAB. “It has been a difficult few years for crops, with significant pressures from weather extremes, pest and disease challenge, and changes in policy. But no one size fits all so it’s important that growers look at individual profiles,” she adds.

“New varieties reduce risk by offering growers the latest in breeding development,” says Ms Leaman. “Importantly, they increase the choice and range of crop profiles, which allows growers to select varieties which are better suited to their conditions, as well as expanding their marketing options.”

Mark Bollebakker, senior field trial manager at AHDB, is anticipating a keen interest in the new varieties. “There are some exciting new varieties on the list this year – but growers need to be looking at their own specific disease pressures and crop challenges rather than focusing on yield.”

Four out of the five new group three wheat varieties will be on display. “A development for this group is a notable improvement in Septoria resistance,” says Mr Bollebakker. “Brown rust resistance is good – but growers will need to look at yellow rust and mildew ratings when selecting varieties for their growing area. Out of the new varieties, Prince has the highest yield but a lower specific weight and mildew resistance,” he adds.

Also on display is a new soft group four variety which will be of interest to growers in the North. “Swallow has shown to have exceptional distilling potential. The Scotch Whisky Research Institute found it consistently outperformed the current varieties in alcohol yield,” he says. “The variety has very good lodging resistance and good all round disease resistance – its Septoria rating offers particular improvement compared to varieties currently grown for the grain distilling market.”

And the hard group fours have seen two new additions – both to be found on the crop plots. “RGT Wolverine’s BYDV resistance trait is going to be attractive to growers,” says Mr Bollebakker. “It has a good yield and an okay Septoria and brown rust rating – but it is not resistant to orange wheat blossom midge and it has a yellow rust rating at the lower end which growers need to consider.”

KWS Cranium is a really high yielder with an average specific weight, good lodging, Septoria and yellow rust resistance – it is also orange wheat blossom midge resistant, he explains. “It performed well in extremes of weather in last year’s trials, but it is a little later than current leaders and not so strong on brown rust and mildew.”

Mr Bollebakker is also eager for growers to see some of the new barley varieties. There are three new two-row winter barleys – Bordeaux, KWS Tardis, and Bolton. All have competitive yields against the six-row varieties, with the latter two varieties offering good lodging resistance. And two new six-row hybrid varieties – SY Kingston and SY Thunderbolt. “They offer good specific weights and early maturity, but their resistance to lodging is only moderate and will need careful management,” he says.

New additions to the spring barley range expand growers’ choice. “Skyway has big malting potential and is currently under testing for brewing by the Maltster’s Association of Great Britain,” he says. “It has the highest treated and untreated yield in trials – and is also an attractive feed variety.”

The later date of this year’s Cereals Event means crop plots will be more advanced than in previous years, but they still give visitors a chance to compare varieties side by side while getting the low-down from experts in the field, says event director Alli McEntyre. “Nothing compares to seeing the crop plots in person, and we’re looking forward to welcoming everyone back on-site in Lincolnshire in June.”

Cereals REALLY is happening in the flesh