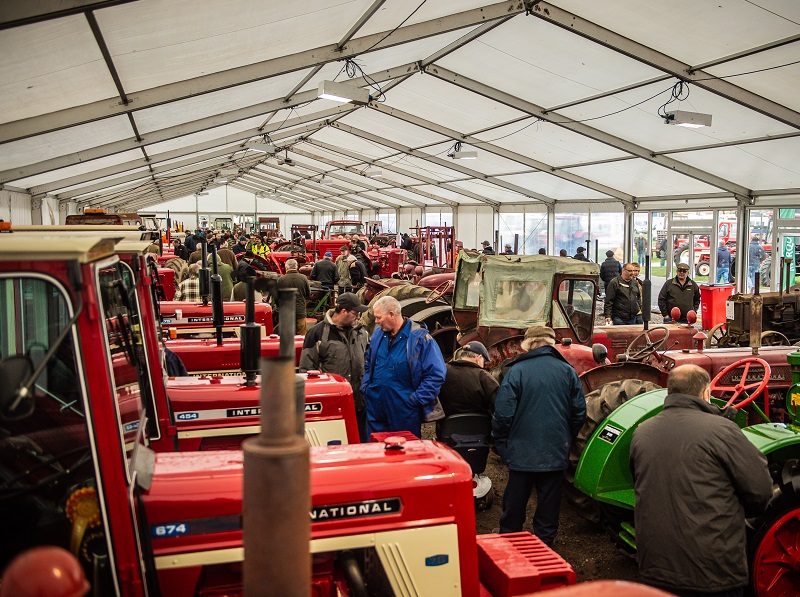 Vintage enthusiasts will be in for a treat at this year’s Newark Vintage Tractor & Heritage Show, with a number of important anniversary celebrations taking place.

Returning to Newark Showground on 13 and 14 November 2021, the two-day event brings together enthusiasts to see hundreds of vintage tractors, commercial vehicles, military and stationary engines from across the UK and Europe.

There will also be a special one-off celebration of the 25th anniversary of “Fordson 500”, which brought together 1,002 Fordson tractors dating from 1917 to 1966 at Newark Showground in June 1996. The Show is inviting participants from the original line up to be part of this feature.

“There was a really electric atmosphere at the original event,” says Nicholas Kitchen, who was chairman of the Fordson 500 committee, exhibited six tractors and commentated on the parade. “There was great camaraderie and people still remember and talk about it with great affection.”

The original event – which attracted 20,000 visitors and raised £6,000 for charity – was the brainchild of the late Eric Ducksbury, then president of the Nottinghamshire group of the National Vintage Tractor Club.

“He thought it would be nice to get 50 Fordsons together in one place at one time, but that then grew to 500,” says Mr Kitchen. “In the end we had 1002, and won an entry into the Guinness Book of World Records. I don’t think that will ever be beaten; it took over two years to organise!”

Organisers are hoping to attract 100 exhibits from the original event, and among them will be Mr Kitchen’s 1940 Fordson Model N, which he first drove when he was 12 and purchased in 1973. “It’s got a special place in my affection – I’ve lots of memories and have had a lot of fun with it.”

Painted in the original harvest gold colour, the tractor has been used on a lot of publicity material as well as out in the field at ploughing matches and harvest.

“As a war time tractor, the Fordson was painted green in 1940-41 so it didn’t stand out in the field,” explains Mr Kitchen. “Mine has been restored twice – the original Fordson 500 spurred a lot of people on to complete restorations. Collecting is like a disease, you just can’t give it up.”

Another tractor which was at the original Fordson 500 and will be making a return is one which New Holland apprentices restored 25 years ago. “Of course, a lot of tractors have changed hands and unfortunately some people are no longer with us, but any tractors which were originally exhibited are very welcome back.”

The 990 was introduced in October 1961 and proved to be one of the best tractors to come from the Meltham factory. It had a bigger clutch, stronger back end and heavier castings than the 950, along with a new engine with a cross-flow cylinder head. With a longer four-inch stroke, it boasted 52.5 BHP at 2,200 RPM, so was capable of even the toughest of jobs.

Part of the Implematic range, it had a superb 12-speed automatic gearbox and six-stud rear wheels. Its popularity meant production had to be stepped up to meet demand, leading to the 950 being phased out in December 1962.

Built from 1971 to 1975 at Basildon, the 7000 became a farming icon. Its four-cylinder engine was fitted with a turbocharger, giving it previously unheard of 94 BHP and making it the first mass-produced turbocharged tractor to be produced in the UK.

Featuring a tall air intake stem and bowl, the tractor answered demand among farmers and contractors for ultimate horsepower, and gained a strong following.

The 7000 was the first tractor to carry Ford’s new torque-sensing load control, so the draft control system worked equally well with mounted or semi-mounted implements. It had hydraulic power steering and was offered in two basic configurations: All-purpose and Rowcrop. Despite being a compact and economic tractor, it was robust and with maximum ballast (>1814kg) it was rated for 3,691kg of drawbar pull.

Built in Dagenham from 1945 to 1952, the E27N was so named for England 27 BHP, model N. It had a petrol and tractor vaporising oil (TVO) side-valve engine with a single-plate clutch, crown wheel differential, spur gear final drive and independent drum rear wheel brakes.

It came in standard or high-speed transmission versions, capable of 4.2mph and 7.5mph, respectively. Painted in dark blue with orange wheels, it had an improved hydraulic lift system, and from 1948 had the option of a Perkins P6 diesel engine with 45 BHP.

Optional extras included electric starting, hydraulic linkage and pneumatic tyres; the Land Utility model had rubber tyres as standard but did not have adjustable wheel track settings. Implements like trailed Fordson Elite ploughs, cultivators and ridgers were manufactured for the E27N at the Ford Motor Co’s factory in Leamington Spa.

Designed by Harry Ferguson, the TE20 was by far the firm’s most successful design; over 500,000 were built by the Standard Motor Company at Banner Lane, Coventry, from 1946 to 1956. The Little Grey Fergie had a four-cylinder, 2,088 cc engine producing 20 BHP and was so revolutionary that Ferguson set up a training school for dealers, engineers, farmers and salesmen to learn how to operate it.

Key to its global success was its unique three-point hydraulic linkage, which replaced the previous trailed method of implement operations. Effectively turning the tractor and implement into a single working unit, it was acclaimed as one of the most important engineering developments of the 20th Century and significantly advanced food production efficiencies.

Visitors can expect to see more than 1,000 vintage tractors, machinery and commercial vehicles alongside a wide range of trade stands selling vintage parts and equipment. On Saturday, 13 November, there will be a live auction of vintage equipment, with an autojumble taking place on Sunday, 14 November. Visitors can also enjoy one of the county’s largest congregations for the annual Service of Remembrance held amidst the vintage tractors, as well as tractor and trailer rides and a display of remote-controlled trucks, tractors and diggers.