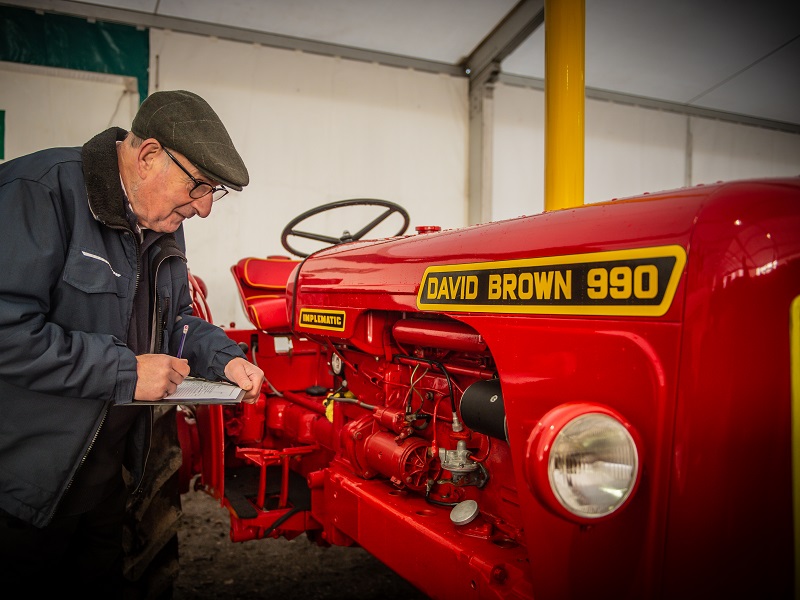 The David Brown Tractor Club is preparing to celebrate 60 years of the 880 and 990 at the Newark Vintage Tractor and Heritage Show on November 13 and 14.

The club stand will showcase some of the earliest 990 and 880 models brought to the show by members. There will also be a focus on the revolutionary Hydrashift gearbox, 50 years after it was introduced, and information on founder David Brown.

His involvement began in 1936 when a subsidiary of David Brown and Sons (Huddersfield) Ltd struck a deal with Harry Ferguson to manufacture the Ferguson Brown tractor. The tractor was the world’s first production tractor to be equipped with a hydraulic lift and converging three-point linkage.

Around 1,350 Type As were built before Ferguson left to work with Henry Ford, prompting David Brown to create his own prototype tractor. The tractor – the Vehicle Agricultural Kerosene 1 or VAK1 – was demonstrated at the Royal Show in 1939, and established the brand.

Fast forward through a number of range changes and the marque’s most popular tractor, the 990, was unveiled in 1961. Known as the Implematic, it wore David Brown’s red and yellow livery.

“The crossflow cylinder head, in conjunction with a two-stage front-mounted air cleaner, developed 52hp from the direct injection diesel engine,” Mr Brereton says. The tractor earned a reputation for being able to handle the cultivation kit of the day with ease, and sales grew.

The Implematic range was followed up with the launch of the Selectamatic 990 in 1965. The livery was changed from red and yellow to the iconic orchid white bodywork and poppy red wheels and mechanics. The term Selectamatic referred to the hydraulic system and the tractor boasted a multi-speed PTO as standard, differential lock and an engine uprated to 55hp.

The main production run lasted until 1971, with smaller runs being produced right up to 1980. More than 67,000 990s were built at the company’s Meltham works, making it numerically the most popular David Brown tractor ever built.

The 990’s sibling, the 880, also celebrates its 60th anniversary this year. It was offered alongside the 990 from 1961 as a four-cylinder Implematic developing 42.5hp from its diesel engine. In 1964 the first model was superseded by the new three-cylinder engine which produced higher torque and better pulling power.

A year later the 880 was upgraded again, adopting the same Selectamatic hydraulic system as the 990 and the new colour scheme. Production ran until 1971 with a total of nearly 40,000 machines having left the factory for use across the world.

The third key anniversary that will be celebrated at the show is the 50th year since the Hydrashift gear system was introduced in the 1212 tractor. This revolutionary gearbox, introduced in 1971, was one of the first semi-automatic powershift transmissions fitted to a tractor in the UK.

Through low, middle and high ranges and selectable without a clutch through 1,2,3 and 4 gears made tractors infinitely more controllable in the field. “Such was the groundbreaking innovation, descendants of the Hydrashift still keep modern-day tractors working hard on the land,” Mr Brereton says.

This importance to agriculture meant David Brown Tractors Ltd was awarded the Queen’s Award to Industry and the Design Council Award. Visitors to the Newark Tractor Show will be able to see a wide range of David Brown tractors, alongside other key historic brands and equipment.