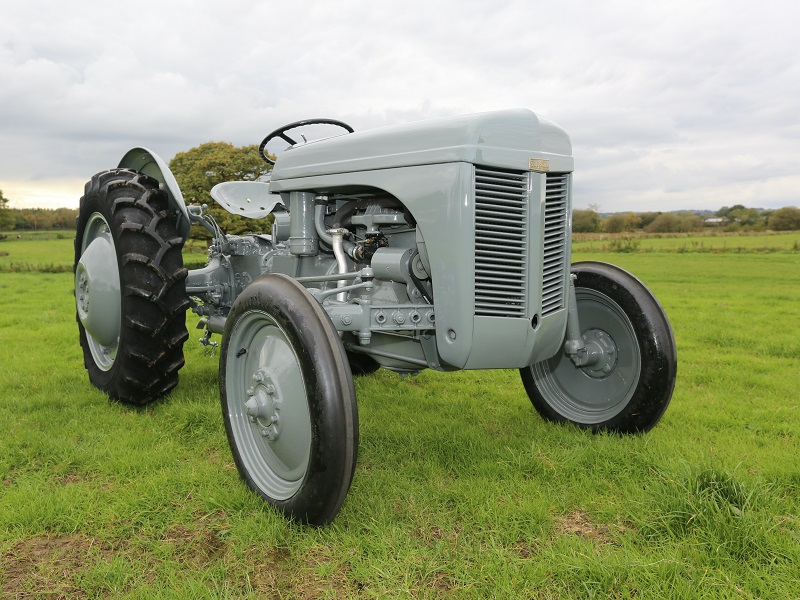 When Ferguson enthusiast Raymond Browne stumbled across a TE20 covered in briar and brambles, he knew straight away it was an early model. But it wasn’t until days later he realised he had discovered TE20 Number Six, which rolled off the assembly line during the first week of production in 1946.

It is the oldest known example outside the Ferguson museum’s Number One and will be on show at the Newark Vintage Tractor and Heritage Show on November 13 and 14.

Mr Browne from Cookstown, Northern Ireland, takes up the story of his find. “I had been at a breaker’s yard looking for parts for a TE20 that I’d bought a few months earlier in June 2019,” he says. “I noticed a tractor in the bushes and saw tell-tale pointers like a long air filter housing and the variable stay at the top of the radiator. Those features told me immediately, it was an old one.”

But it was so overgrown further investigation was impossible, that day. Instead, he returned later with heavy-duty recovery equipment to extract the tractor and transport it home.

Only once it was in his yard did the excitement really start to mount. As he pressure-washed the mud and foliage away, the number six emerged on the bell housing. “I couldn’t believe it. To say I was over the moon doesn’t even come close,” Mr Browne says.

Other crucial pointers to the genuine age also checked out, such as the power unit, which was typical of the first few. The tractor had an American-built Continental engine – a stop-gap to fill in for the planned Standard unit. Development of the Standard motor had been held back by steel shortages and rationing in post-war Britain, Mr Browne explains. Those same logistical setbacks also slowed production of Ferguson’s TE20 and just 315 were produced in 1946, making the early types even rarer.

“The engine was in relatively good condition with the crank and pistons still ok so it hadn’t been worked too hard in its life,” he adds. Likewise, the cast iron gearbox needed surprisingly little work for a 75-year-old vehicle, despite being full of rainwater. Mr Browne replaced four bearings but noted that the selectors were still serviceable.

Other work required was to the check chains and shackles. These were badly worn and Mr Browne decided to replace them from his extensive store of parts, amassed over years from farm sales and ‘barn finds’.

Warped brake drums were also addressed in-house. “The drums were out of true but that was sorted out using my own lathe here,” Mr Browne says. Items like the original starter motor, regulator and dynamo were sent away to undergo reconditioning with a specialist before refitting.

Among the final jobs were the tinwork, tyres and paintwork. While the mechanicals were in relatively good shape and mostly repairable, the years had taken their toll on the tinwork. “It was pretty much all rotten and I needed to replace it with appropriate parts from my stores.” Only the grille tee-piece had to be manufactured – otherwise the tin is original Ferguson vintage for this tractor.

With genuine period tyres and authentic paint work TE20 Number Six was back to its original splendour, and will be on show alongside several other beloved Little Grey Fergusons as part of the marque’s 75th anniversary celebrations.

Get in or miss out, warns Roadnight Taylor