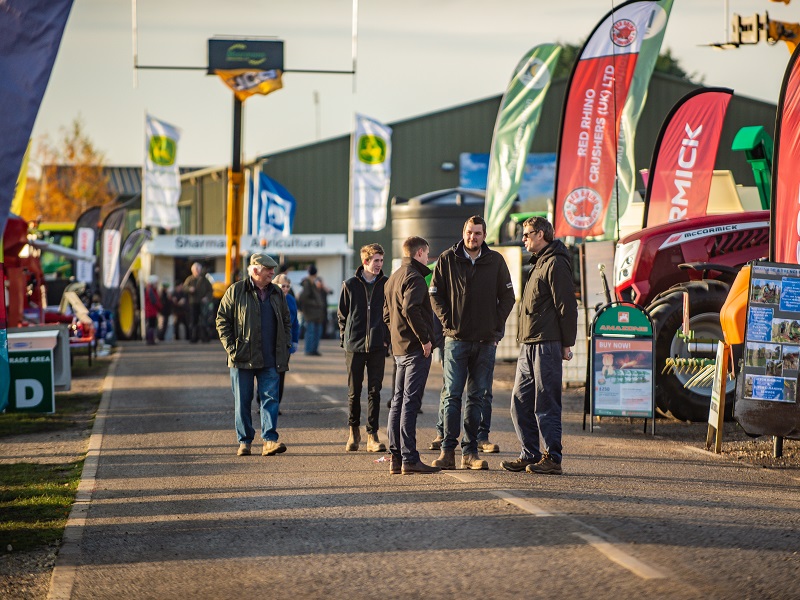 Farming can be instrumental in tackling and preventing climate change, through a combination of carbon sequestration, improved soil health and low emission machinery. Hand-in-hand with that go improved farm efficiencies and profitability, as visitors to the Midlands Machinery Show on Tuesday (9 Nov) discovered, with advice and demonstrations from a wide range of experts and equipment manufacturers.

As COP26 draws to a close in Glasgow, the NFU environment conference, held at the show, focused on the opportunities presented by striving to achieve net zero. “Voluntary carbon offsetting is set to grow in a big way in the next 10 years,” said Bruno Gardner, managing director of NFU EnZero. Many corporate businesses have committed to achieving net zero by 2030, so offsetting is predicted to grow up to 20-fold.

“Agriculture can play many roles in offsetting,” explained Mr Gardner. That could be through tree planting, soil carbon sequestration, upland peat restoration, or using feed additives to reduce livestock methane emissions, for example. “There are already companies selling carbon credits in these areas.”

However, farm carbon trading is in its infancy and there are still lots of details to be ironed out, including government policy and standards. And retailers may require farmers to achieve net zero themselves before selling carbon credits – something which new electric tractors could go some way to achieving.

New to the show this year, the Clean Power demo ring featured the latest battery powered tractors, telehandlers and mowers. These included Avant’s E6 loader – suitable for a range of jobs on the farm, the versatile Farmtrac FT25G tractor, and the Raymo radio-controlled mower.

In the main handling arena, drivers put the electric Kovaco Elise 900 skidsteer loader through its paces alongside the Kramer electric 25.5E wheeled loader. But even diesel-powered machinery is becoming more eco-friendly, with the demonstrated Manitou telehandlers featuring auto-stop as standard. This cuts the engine when idling for a set period of time, reducing fuel consumption and the number of hours accumulated by the machine.

Reducing tractor passes in the field naturally slashes fuel consumption and soil compaction – and Devon farmer James Lee went one step further to improve soil health by co-designing a completely new strip till. “We have big problems with soil erosion on our Devon slopes so have been direct drilling since 2007 to improve soil structure and reduce costs,” he explains.

But direct drilling maize is more difficult, so with Rhun Jones at Grange Machinery he produced a bespoke strip till to optimise yields with minimal soil disturbance. When combined with growing cover crops over the winter, the results have been phenomenal. “We had 200mm of rain in May yet it dried out and established beautifully,” says Mr Lee.

The extensive root structure supported the harvest machinery, so there was no soil damage or erosion after harvest in October, and Mr Lee direct drilled the subsequent wheat crop straight into perfect conditions. “Maize gets a bad reputation but there’s no need to move the soil; the machinery we have built for the task is bang on.”

Other ways to improve soil health and sequester carbon include boosting its organic matter – and adding biosolids makes for a true circular system. Containing phosphate, nitrogen and other minerals, biosolids are produced from treated sewage sludge – and Severn Trent Water is working to produce it with even fewer carbon emissions. “The UK produces 3.4m tonnes of biosolids a year and over 90% is spread on agricultural land,” said biosolids recycling manager Lee Musgrove.

A slow-release fertiliser and soil conditioner, biosolids can also be pelleted, reducing transport requirements and therefore the carbon footprint. “It’s a safe and very sustainable way of storing carbon in the soil, and we’re working with the Carbon Trust to measure this.”

Another critical aspect of climate change is the impact it has on water availability; by 2050 the Environment Agency predicts 6% more winter rainfall and 15% less summer rainfall, with corresponding increases in flood and drought incidents. Farmers should therefore consider harvesting and storing rainwater to tackle both extremes, said Michael Jorden, director at JRH Water Management.

“Some 86% of farmers rely on mains water, and prices have increased by 30% year-on-year,” he said. Harvesting rainwater will therefore reduce water costs as well as improving water security. With several grant schemes offering funding, and tax incentives, installing harvesting equipment will pay for itself within one-six years, added Mr Jorden.

Investing in such sustainability is key for future success in agriculture: “Farmers’ profits are not going to change; all sectors will have to continue to force more out for less or the same.”