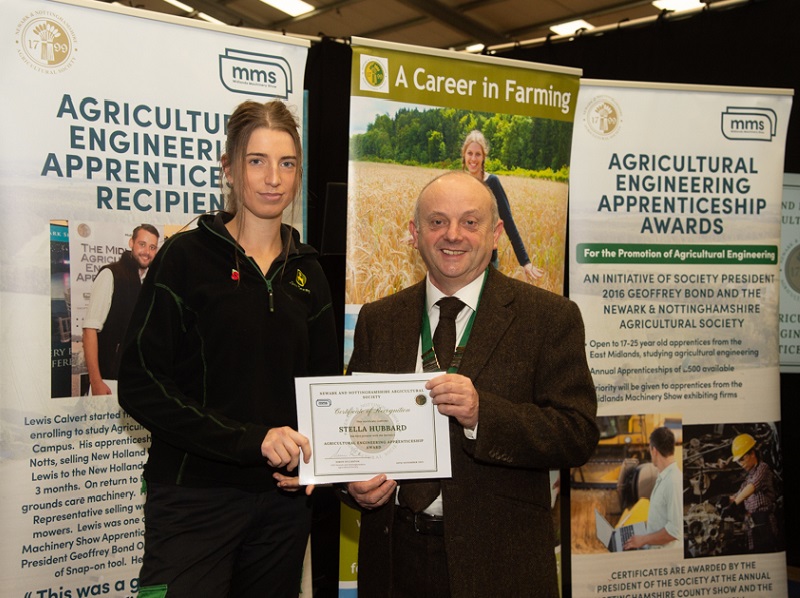 A group of aspiring young agricultural engineers were recognised for their dedication and achievements at the Midlands Machinery Show this week.

The annual Newark and Nottinghamshire Agricultural Society’s Engineering Apprenticeship award saw six students step to accept a cheque for £250, the first in a two-year instalment totalling £500.

Oliver Coupland is in his second year at Ripon Farm Services, Retford, and loves visiting different farms with a variety of challenges. “I like the satisfaction of being able to get machines back to full working order,” he said. “The money will benefit me as I will be able to purchase new battery operated tools, making the jobs I do easier and more time efficient.”

A steam engine fanatic, Mr Coupland would like to be a master technician with responsibility for training up new apprentices. “One day I would like to be our depot’s gearbox specialist as I like the challenge of stripping and rebuilding them.”

Another Ripon Farm Services apprentice – based in Louth – is Isaac Kirk, who wants to specialise in harvesting support. “So far my apprenticeship has been an eye opener, the knowledge and skills I have gained are immense,” he said. “Every day is different, I’m learning all the time; it’s my dream job.”

Chandlers also boasted two apprentice winners; Kieran Snowden at the Grantham depot and Zac Elsdon at Holbech. Both have a passion for farming and are looking forward to developing their careers. “It makes me very proud that the work I do helps farmers to carry on working and put food on our tables,” said Mr Snowden. “It is a great honour to have been selected for this award and will help me progress in my career as well as giving me confidence that the industry is behind me.”

Mr Elsdon’s love of tractors spans the years, from his current work on cutting edge kit to vintage tractors; something he has inherited from his grandfather’s existing collection. “I helped to restore an old Massey Ferguson TE20 for the city of Norwich aviation museum; I have been interested in tractors and how things work for as long as I can remember.”

It’s a sentiment echoed by Luke Hatton, who works at Russells, Newark. “Growing up on a farm with my Grandad I enjoyed helping repair machinery and driving the tractor,” he said. “My proudest moment so far would be last harvest when one of our customers snapped the front axle on his combine. It was estimated the job would take about 10 days but my mentor and I ended up doing it in under half that, allowing the customer to get back to harvest without too much disruption.”

Carrying the flame for women in the industry was Stella Hubbard, who works at Farol as a John Deere apprentice. “At the age of five I would come into Farol with my dad and assist with picking parts for jobs/ customers,” she said. “During school I developed an interest in metal work and design and took a particular interest in removing and installing components.”

Having worked at John Deere in both Australia and the UK, she is now enjoying being given the independence to carry out jobs by herself. “I would like to inspire more women to take on this career. I would also love to own my own farm and develop a career in farming.”

John Edwards, technology consultant at Farol, started out as a John Deere apprentice at the age of 16; 10 years later he was setting up the firm’s new technology department. “It’s a great career path,” he said. “It’s so important that apprentices have exposure to this new technology; it’s moving on so quickly. It’s nice to have career progression and it’s key to have young blood coming through.”