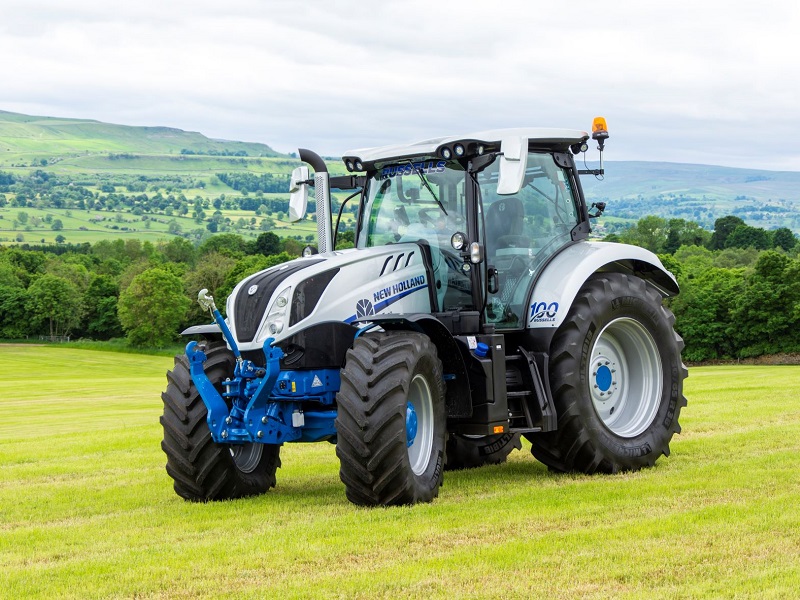 This year’s Midlands Machinery Show on 9-10 November provides farmers and growers with one of the first opportunities for two years to get up close to the latest kit.

Despite huge challenges in the supply chain, exhibitors have pulled out all the stops to display the newest and most innovative kit available on the market.

Show manager Elizabeth Halsall says: “There will be something for everyone, from the smallest producer to the largest arable contractor. The event will feature hundreds of exhibitors including national manufacturers, distributors and regional dealers, alongside live demonstrations and a packed seminar programme.”

Here are just some of the highlights on exhibitor stands to help you plan your day.

It’s all change on the Sharmans stand as the firm will be attending its first Midlands Machinery Show as a Case IH dealership.

To mark the switch, Sharmans will bring the gigantic Case IH Quadtrac 620. The crowd-puller is the most powerful of the Quadtrac series boasting a 12.9 litre, six-cylinder, 620hp engine.

Two of its stablemates – the Case IH Puma 240 and Maxxum 145 – will also be flying the flag for the marque.

For something completely different, Sharmans aims to demonstrate the manoeuvrability of the JCB electric 19C mini excavator.

Visitors will be encouraged to try the digger for themselves and challenged to load three JCB footballs into a drum. Other highlights, among a long list of kit, include JCB’s 524-70 telehandler, a Krone rake and Amazone spreader.

Chandlers will debut the new-spec Massey Ferguson 7S and 6S models among an impressive array of tractors and kit. The new MF models match the latest style of cab controls and interior seen in the flagship 8s which will also be on Chandlers’ two stands alongside an 8740 and 5S.

The MFs will be joined by Fendt and Valtra tractors, Manitou telehandlers and Chafer sprayers. Fendt models showcased include the 900, 800, 700 and 500 series.

For many showgoers it will be the first chance to see the FendtOne control system. The system allows seamless transfer of data from the farm office software to in-cab displays.

Valtra T5 series, N5 series and G5 series tractors, and a wide range of implements from McConnel, Opico HE-VA, and Maschio equipment will also be on display.

Intriguingly, Chandlers is promising an exciting road vehicle launch on the stand but whether it’s from Iseki, Corvus RTV or SsangYong remains to be seen.

RES Tractors will showcase an extensive range of equipment including low disturbance and direct drills, tractors, balers and headers.

Among the highlights is the full-flex 41ft MacDon FD2 Flex Draper. The header boasts 20% more capacity, 40% faster cutting and 70% more flex than its predecessor. It is so large the firm has secured outside space at the event to show off the header.

On the indoor stand RES aims to show two offerings from New Holland – a T6, with the trademarked Dynamic Command transmission system and the 300hp T7-315HD.

Alongside the New Hollands on the stand there will be a McHale V6750 semi-automatic variable chamber baler with a 15-knife chopper unit and heavy duty rotor.

Clover Farm Services aims to be on-trend with a host of min-till, low-disturbance kit on its stand. Interest is high in low-emission cultivation techniques and Clover’s stand will showcase the latest offerings from the Pöttinger stable.

There will be four pieces of kit from the company, including the brand new Rotocare V-folding rotary hoe mechanical weeder. It will be joined by a Terradisc cultivator and Lion power harrow with seed drill box, along with a Synkro mounted stubble cultivator.

The stand also hopes to provide a solution for cleaning up operations on the Midlands roads in the form of a Tuchel heavy duty, two-shell, rotary sweeper.

Burdens’ stand will be packed with a staggering variety of kit from heavyweight tractors to rolls, diggers, trailers, mowers and even robotic weeders.

Among the display is an extensive line-up of New Holland tractors with models from three ranges; the T4, T6 and T7. As well as the tractor range there will be a New Holland Construction tracked mini digger on show.

From Kuhn’s equipment list Burdens will bring along an Axis 40.2 H-electronic mass control fertiliser spreader and the Kuhn 280 linkage-mounted mower.

The stand will also have one of the more innovative pieces of equipment at the show in the shape of a Naio Technologies robotic weeder. The autonomous weeder is a large-scale, inter-row weeder which may become increasingly attractive if the squeeze on labour supply continues.

And finally, with Christmas looming, younger visitors will be attracted to a Polaris Youth side-by-side ATV.

New Holland dealer Russells will mark its 100th anniversary with a special edition tractor at the show. The Yorkshire-based firm has commissioned a one-off T6-180 painted with a design inspired by the Silver Jubilee Ford 7810 that was offered in the UK in 1989.

This will be joined on the stand by a restored Russell 3D tool carrier tractor. The 3D tool carrier is believed to be the last one built. It was bought and fully restored by Russells employee Joe Marshall.

Maintaining the theme of special editions, Russells will also showcase  a new Blue Power T7 tractor. Claiming to be the most luxurious model on the market, the T7 boasts a thick-pile carpet, a specially designed seat, exclusive paintwork and an extensive kit list.

Along with the tractors on show, Russells hopes to display an FR650 forage harvester, an electric ATV and wide range of Pöttinger and McConnel equipment.

Headlining on the B&B Tractors stand is the 265hp, 7.4-litre Massey Ferguson 8s – winner of the 2021 Tractor of the Year title and coveted Red Dot Award.

The hugely popular model has been designed using feedback from farmers and growers. It boasts the latest ergonomically designed cab with class-leading noise levels and the new MF vDisplay digital dashboard.

Also taking centre stage on the B&B stand is Sany’s SY26U 2.62-tonne excavator which will be on show for the first time in the UK. The short-tail-swing excavator is especially suited to use in confined circumstances and has a dig depth of 2.82m.

Alongside these two machines, B&B will have a Manitou 741 telehandler, an N-Series Valtra 154 and a Vario series Fendt 724 on display.

Among the equipment on show is a Kuhn VB 3160 variable chamber round baler, a Grimme GB215 belt-drive potato planter and Vaderstad CR 300.

New features and old favourites on show at Cereals