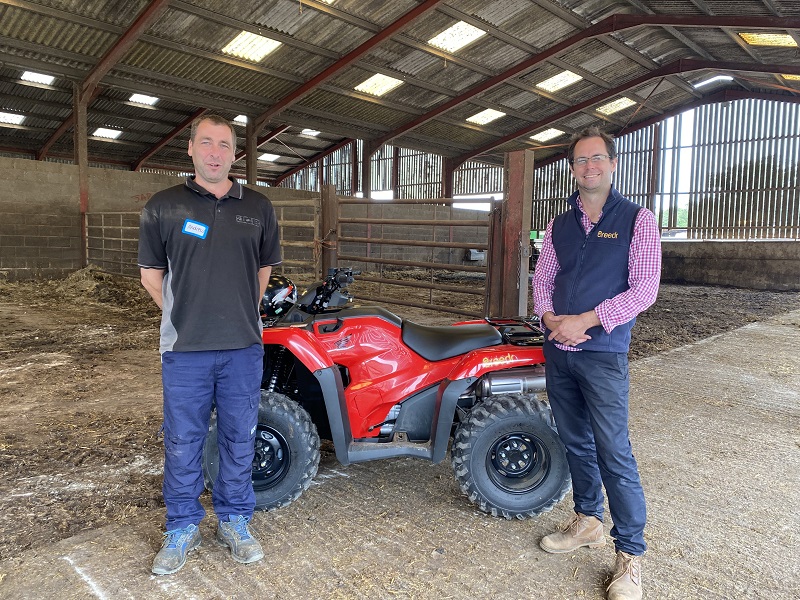 Breedr, the free livestock performance app, has launched its Weigh to Win competition again this winter, encouraging farmers to maximise their cattle growth rates and efficiencies.

The firm – which marries agri-technology with practical farm advice and networking – has got two Honda TRX420 Fourtrax quad bikes, worth £7,999 apiece, up for grabs. The competition will be split into two categories; cattle over 12 months and under 12 months, with predicted growth rates helping producers to manage their stock for maximum efficiencies. In addition, Breedr will be offering specialist advice and support throughout the competition.

“I started Breedr with the simple aim of helping farmers like my parents prove the quality of their livestock to improve their returns,” explains co-founder Ian Wheal. The smartphone app syncs automatically with digital weigh heads – or weights can be entered manually – ensuring all of the animal’s information is in one place. In addition, it syncs with the Cattle Tracing System (or ScotEID) and predicts daily liveweight gains so that producers can sell finished cattle at the optimum time or weed out poorer performers.

Last year’s winner in the over 12-months category was Andrew Hyde, who keeps 450 head of beef cattle at Woofferton Grange, Ludlow, Shropshire. He buys British Blue x dairy calves from a dedicated rearer at 12 weeks old and finishes them on contract for a large supermarket. “We get them in at about 130kg and finish them at around 600kg liveweight, at 20-22 months old,” explains Mr Hyde.

His winning group of 46 cattle averaged an impressive daily liveweight gain (DLWG) of 1.88kg over the five months from 1 November to 31 March, which he attributes to grazing them over the summer, growing their frames so they were ready to respond to a fast-growing diet over the winter. “We used to select finished stock by eye, so now sometimes we’re shocked by the actual weights – I was definitely surprised by the way they grew last winter.”

Winning the under 12-month category was Jamie Paterson, farm manager at Little Spott Farms, Dunbar, Scotland. He manages 130 Limousin x Charolais suckler cows across 400 acres of grassland, rearing the calves to sell as stores at seven to eight months old and 400kg liveweight. “We try to keep things simple – we calve inside in March and April before turning them out to grass over the summer,” he explains.

Mr Paterson creep feeds the calves at grass from August onwards – and this year replaced his barley and mineral mix with a specialist high-quality calf blend. “It pushes them on a bit quicker; if we can sell calves a month or more earlier, then at an extra cost of £30/t of feed it’s a worthwhile return on investment.” As a result, his winning batch of 35 animals averaged a DLWG of 1.44kg.

Mr Paterson weighs the youngstock once a month, moving them into different groups according to their size and weight. “Using Breedr to record the weights with EID tags is really easy. Plus it predicts their weights – so if you haven’t weighed for a week or so you can still see which ones to pick and sell; it’s pretty much bang on every time.”

• For more information visit breedr.co/weigh-to-win or call 01243 210286. To enter, simply download the free Breedr app, scan your cattle passports, weigh the animals using the crush mode, and keep track of weight gains by weighing roughly every six to eight weeks. Breedr will be offering advice and support throughout the competition – keep up to date by joining its Facebook group.

The Dairy Show to host the top Jersey and Guernsey shows