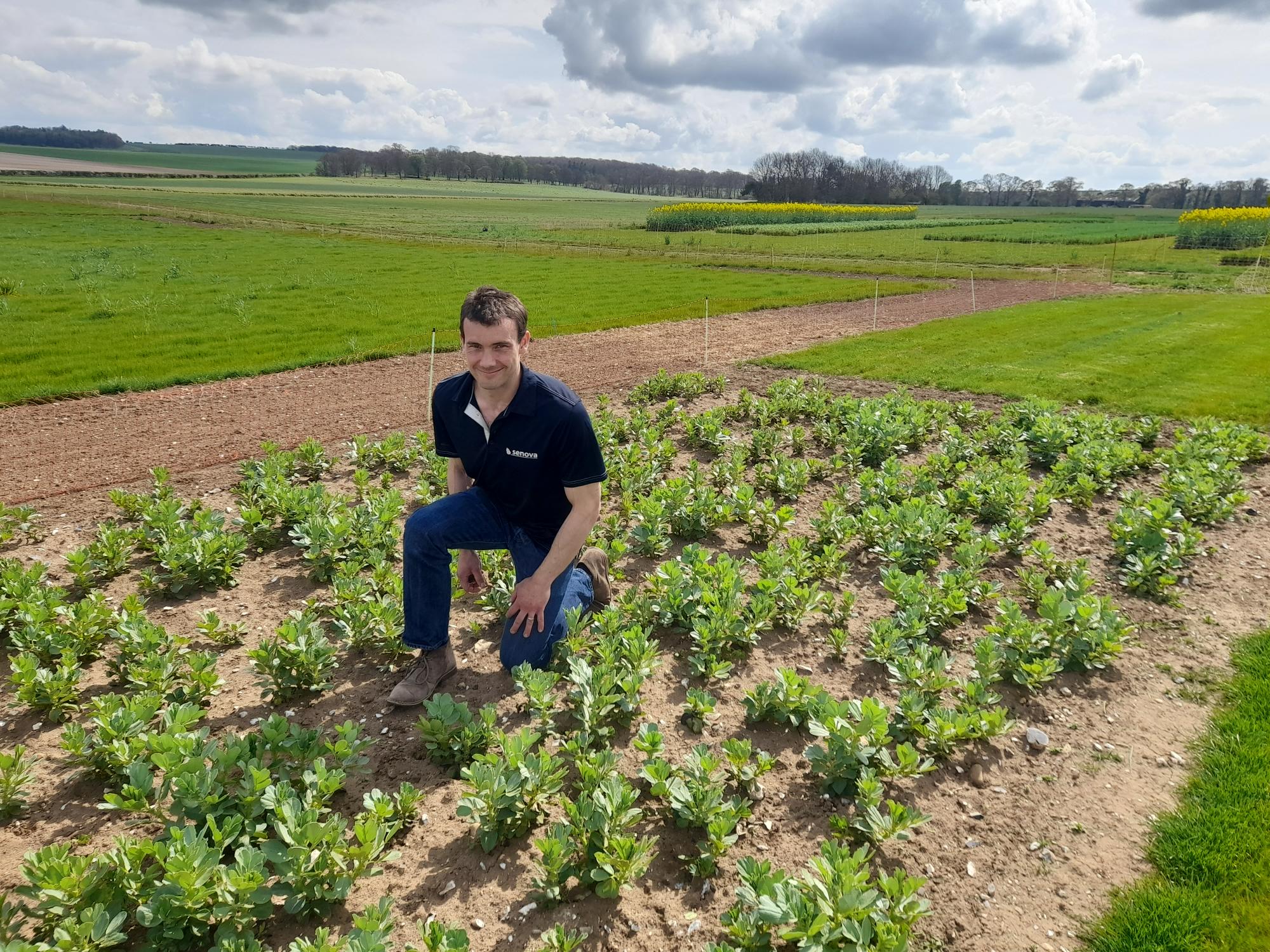 Cereals exhibitors took an early opportunity to showcase their crop plots at the Cereals Spring Crop Plot Day at the event venue, Chrishall Grange near Duxford in Cambridgeshire.

Kicking off the preview day, host Robert Law of Law Farming said: “It will be the sixth time I’ve hosted the event. Two years ago Covid came and we had to spray the plots off – I’m happy that farmers will now be back here, visiting Cereals.”

Mr Law farms 500ha at Chrishall Grange as part of a 1600ha farming enterprise, a mixed farm with arable crops including sugar beet, an 1800-ewe flock and 60 suckler cows.

Four years on from when he last hosted the event, there have been enormous changes. “First it was the early days after the Brexit referendum, then we had Covid, now we are six weeks into the conflict between Ukraine and Russia. Suddenly one-third of world wheat production has been affected by the conflict.

“We need to focus on our primary role as food producers, feeding the nation, alongside the environmental agenda,” he said. “We are moving into the unknown. I am trying to run a business but sometimes it seems like being at a casino.”

Cereals will give an opportunity for people to meet up and discuss business challenges, said Mr Law. “For the past two years they haven’t been able to do that. I’m Zoomed out and looking forward to seeing people back at the event.”

So what crop features does the event have in store?

“There will also be a full range of hybrid barley varieties including SY Kingsbarn, SY Thunderbolt and SY Canyon. These will be included in the ‘Rooting Zone’ demonstration where the hybrid rooting vigour will be on display.”

On the winter malting side, there will be wider availability of Craft and Electrum – and SY Vessel will be the first non-glycocidic nitrile (GN) winter malting variety on show.

Laureate remains a favourite spring malting barley and there will be beer available on the stand brewed using malt from the variety, named by the winner of the ‘name the beer’ competition.

First time exhibitor, LSPB is keen to expand awareness of its spring bean portfolio and is displaying Vertigo, Fanfare and Lynx, said managing director, Chris Guest. “We also have a candidate variety but this is still under code.”

Also in the LSPB plots are two winter oilseed rape varieties; Respect and Flemming, which come from a new and exciting generation of hybrids, said Mr Guest. “We have commercially launched these after 20 years of research and testing to develop varieties containing the new gene RlmS, which offers a new source of resistance for protection against phoma. Flemming also features turnip yellows virus (TuYV) resistance.

Other plots will showcase winter bean and spring pea portfolios along with spring wheat.

As plant breeders’ attention turns to tackling the effects of climate change, which may increase susceptibility to pests and diseases, it is important to be able to mine ancient wheat lines to develop more resilient varieties, said James Clarke, head of communications at Rothamsted Research.

“We are using robotics to watch wheat varieties growing 24/7 and we are able to monitor performance in detail, from emergence to harvest,” he explained. “This helps us identify suitable traits as fast as possible.” One area to look at could be how wheat responds to hot nights as traditionally it doesn’t thrive in these conditions.

Available in limited volumes in 2021, this season is the first year many farmers will have the chance to put fungicide Univoq to the test, and Cereals plots will show the lasting protection delivered by a T2 fungicide spray, he explained.

PT303 Protector Sclerotinia will also be on show. The hybrid from Corteva’s Pioneer OSR brand has consistently given top yields across multiple trial programmes. And it provides tolerance to a disease which is associated with the UK’s increasingly common high rainfall events, said Mr Nichols. “PT303 also combines proven TuYV resistance and multigenic phoma resistance for a best-in-class overall disease resistance rating.”

Corteva is also launching its Utrisha N, which enables plants to fix nitrogen from the air, and is showcasing Instinct, which has the potential to reduce nitrogen losses from combinable crops, he added.

“We are really looking forward to being back at Cereals and putting the spotlight on these breakthrough technical innovations.”

With oilseed rape prices at an all-time high, growers have the opportunity to add even more value by growing high erucic acid rape (HEAR) varieties, said Nigel Padbury of Premium Crops. “We will have three varieties on demo. We are offering a contract for HEAR with a £130/t premium over double zero varieties.”

The company is also demonstrating its winter linseed varieties for sowing this autumn. “With its relatively low nitrogen requirement at just 80 to 120kg N/ha, winter linseed is a real alternative to OSR,” says Mr Padbury.

Varietal, cultural and chemical wheat disease management will form the basis of the NIAB stand at Cereals, with a mix of plots and advice to aid growers in decision-making on disease control.

It has 125 different crop and variety plots including 32 winter wheat and 16 winter oilseed rape varieties from the AHDB 2022/23 Recommended or Candidate List.

This year the stand features plots showcasing fungicide inputs versus yield in winter wheat, a comparison of new cereal fungicides and, for the first time, treated and untreated wheat variety blends.

There will also be a focus on legumes and protein crops, said Kevin Middleton, marketing communications executive at NIAB. “These include lupins, peas, beans, lentils, chickpeas and soya. Our demo plots at Cereals will explore research work on legume crop improvement, alongside opportunities for crop diversification.”

Bayer is relaunching its Dekalb range and as part of this, will be launching its oilseed rape variety, Expose, said the company’s Antonia Walker. “It is flexible, good for early drilling but also suitable for September drilling. Stems are not too long – short to medium in length. It has TuYV resistance, pod shatter resistance and a good lodging score.”

There will also be three new maize varieties from overseas on display.

Winter beans are a key feature at Senova’s stand with Vespa and Vincent the top two yielders on the PGRO Descriptive List.

Tom Yewbrey, seed sales manager at Senova, said winter beans are an excellent break-crop option, with nitrogen prices being so high. “There are good markets for beans. All our varieties are suitable for export and there is increased demand for home-grown protein.”

High yielding hard Group 4 wheat, Dawsum, has proved a popular choice with farmers, as has 2-row winter barley KWS Tardis. “Last year there was limited seed but this autumn it is likely to be the most widely sown 2-row.”

Finding crops that are financially viable and sustainable is difficult in the current climate, however, Cereals offers a good opportunity to look at different crops and pass information back to clients, said Ceres Rural partner Ed Hutley.

Ceres manages the event’s agronomy and while it has been a kind autumn, the site can be prone to drought so Mr Hutley is hoping for moderate rain for the plots to look at their best in time for June.

Looking ahead at prospects for the industry, Mr Hutley said: “A lot of people will be in a relatively comfortable position this autumn, however, there are concerns about next year and we need to put forward sustainable solutions.”

Six practical steps that can be taken to develop a more sustainable or regenerative approach to farming practices are being highlighted by Ceres Rural at this year’s Cereals Event.

Cereals event director Alli McEntyre was delighted to see such a large and strong diversity of crop plots ahead of the event. “It was great to get everyone together and see the interest of the companies and press involved.”