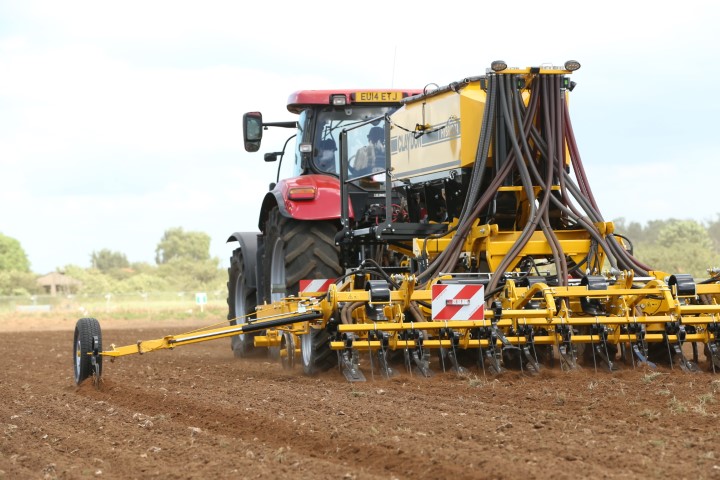 However, switching from tried and tested methods can be nerve wracking and growers will want to ensure they select machinery that will be a good fit for their farm. A strong line-up of live demos and static displays at Cereals will enable them to do just that, with experts on hand to answer any questions.

Amazone will be demonstrating its Primera DMC 6000-2 large area seed drill, says managing director Simon Brown. “Because of its parallelogram mounting of the openers, the Primera achieves the same planting depth across the full width of the drill, with the chisel openers enabling precise and uniform seed placement. The drill generates a tilth which allows some mineralisation in the seed zone, giving the seed a better start. There is also the option to apply seedbed fertiliser, plant a companion crop or apply a microgranule herbicide.”

The company’s Condor 12-metre direct drill will also be on show. “There is a trend towards reduced tillage drilling with a push from the Government, offering financial help for those that get involved. The Condor is also highly efficient and can cover a lot of land quickly, reducing workload,” says Mr Brown.

John Deere will be taking part in the direct drilling demonstrations at Cereals, where farmers will be able to see the 750A All-Till drill in action, says John Deere’s product sales specialist Mark James.
“Available in three, four and six-metre widths, the 750A is a versatile machine. It is designed with large clearances for no-till drilling into stubble, working after minimum or conventional cultivations, and single pass operation for grassland and rough pasture renovation.”

Fitted with the Accord air seeding system, operators will need at least an 80hp tractor and can expect to cover six hectares/hour, depending on conditions, at seeding depths from 13 to 90mm. Seed is applied at a rate of 2-380kg/ha via a central 1,800L hopper and with a single metering system on the three and four-metre units, or a 2300L hopper and twin metering units on the six-metre model.

A single 46cm angled disc opens the furrow at 16.6cm row spacings, with a depth gauge wheel mounted alongside to provide excellent seeding depth control. A semi-pneumatic press wheel pushes the seed to the bottom of the furrow for good seed to soil contact, and a cast iron closing wheel completes the job.

“To maximise yield, the front tine stimulates soil, only where required, in the seeding and rooting zone. Plants take up moisture which is conserved in the unmoved soil. Crops are healthy and thrive on increased soil organic matter and improved soil structure.”

Claydon’s six-metre Evolution mounted drill will be put through its paces in the Cereals demo plot. The Evolution line-up, which includes a five-metre unit and four-metre rigid grain/fertiliser model, incorporates new features to improve operational functionality. Seed depth adjustment is controlled hydraulically, improved access to the metering unit allows easier calibration, while front-mounted discs, which are operated hydraulically from the tractor seat, can be specified for seeding into high residue situations.

Showing the way with zero till is Aitchison, demoing a three-metre trailed zero till drill – the Seedmatic 4024CT, says director Neil Ford. “We will be demonstrating the drill’s versatility. It can drill various seeds like mustard or clover and grass in the same mix. The gentle sponge roller system can manage anything – like peas and oats in the same seed box. Because it’s zero till it causes minimum destruction and ground disturbance. It’s also popular for planting a whole range of crops from cover and grass to wheat and barley.”

An advantage of zero tillage is the ability to reduce fertiliser applications by keeping nutrients in the soil while maintaining good soil structure and health, he adds.

“Cereals was really good for us last year, generating a lot of business and we expect the same this year.”

The Crossflex coulter bar is key to the Espro range’s high working speeds, enabling seed to be placed accurately at up to 17kph. Each coulter is mounted on polyurethane blocks which allow the individual coulters to closely follow terrain contours. Ground pressure and seeding depth adjustment are controlled hydraulically; ensuring a consistent seeding depth across the machine’s full working width and accurate seeding at high forward speeds.

Kuhn’s Optimer 12,000L-litre machine features Steady Control which exerts equal pressure across its full 12-metre width. This means the discs all cut to an equal depth even when the ground is undulating because it compensates for contours by adjusting the ground pressure across the machine’s five sections. The 12-metre machine can also be run at up to 15kph while maintaining a consistent depth.

Other companies exhibiting/demonstrating in the cultivation and drilling arena include Mzuri and Horizon.

“We’re delighted to have such a variety of direct drilling and cultivation machinery in action at Cereals, allowing visitors to compare and contrast,” says Cereals event director Alli McEntyre.

Stronger together at the British Pig & Poultry Fair