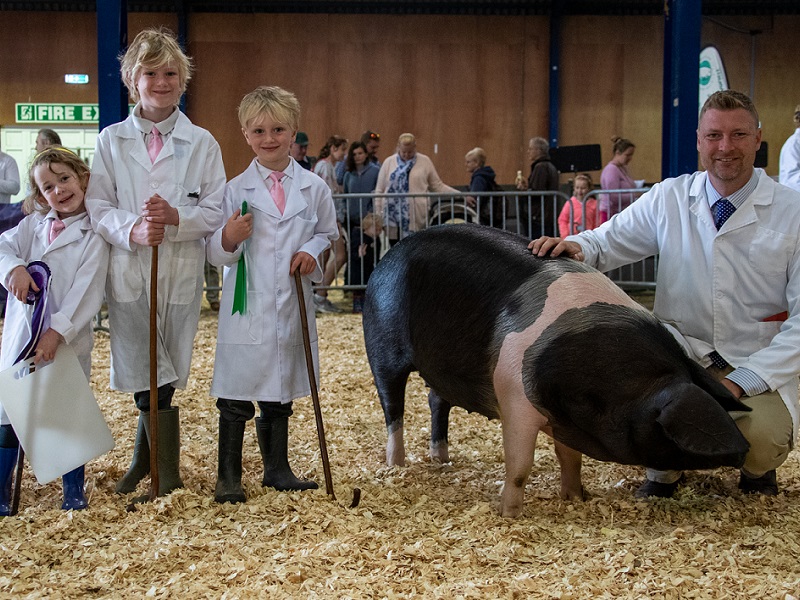 Entries for the Royal Bath & West’s livestock classes have been flooding in from producers around the country, including for the much-anticipated Zwartbles and Bleu du Maine National Shows.

Heading up the Zwartbles sheep judging is breeder Martin Preston, who has judged major and society shows for some 30 years, with the exception of the Bath & West – until now.

So what’s he looking for? “I want a big, square, upstanding animal that is good in the leg and mouth – conforming to the breed standard and with a spark about it,” he explains. “The shearling ewe class is always rewarding with females coming into their prime.”

Picking out the champion will be seasoned judge and Bleu du Maine flock owner, Glen Baird. “We really look forward to welcoming Glen and the breed exhibitors as they compete for their National Show titles,” says senior livestock entries officer Sarah Chick. “And with £71,000 of prize money across all the livestock classes it really is an event not to miss.”

Other new additions to the livestock classes include the dual-purpose Swiss breed, the Valais Blacknose. “The breed was first imported to the UK in 2014 and they’ve grown in popularity ever since,” says Ms Chick. “To reflect this we wanted them to have a place in the ring with seven classes plus breed champion.

“And no doubt they’ll draw the attention of visitors to the show – dubbed the ‘cutest sheep in world’.”

There’s also a welcome return for the Oxford Down. “Entry numbers have been superb this year and we’ve been able to give them their own set of classes once again,” says Ms Chick. “It will be a real showcase of the breed in its own right.”

And the next generation of young shepherds – aged five to 16 years old – will be competing in the Sheep Showmanship classes, with the winners from the intermediate and senior classes qualifying for the Rare Breeds Survival Trust’s Young Shepherd Competition with its grand final to be held later this year at a venue yet to be confirmed.

In the pig lines, a centenary year for the British Lop Pig Society – albeit belated – has boosted breed entries, says Ms Chick. “It will certainly be competitive for the coveted Supreme Champion Pig title.

“Competitors will also be hoping to qualify for their respective breed society’s Champion of Champions, with British Saddleback sows and gilts qualifying for the Breeding Female Championships at the Great Yorkshire Show in July.”

Sadly, avian influenza restrictions have prevented the holding of the popular poultry classes. “But the Champion Egg Show will still go ahead and it will be a beautiful display with an array of shapes, sizes, colours, textures and arrangements.”

The beef and dairy entries are looking strong with the cream of the crop competing for the individual, pairs, and group interbreed championships.

Commercial cattle and interbreed judge, Clive Roads, is looking forward to seeing all the major beef breeds – native and continental – represented at the show after a three-year hiatus. “I’m sure everyone is excited to be coming back – I’m thrilled to be invited to judge.”

As the society auctioneer for numerous breed societies and with 48 years of livestock auctioneering under his belt, he’s respected for his keen eye and enthusiasm for beef stock. So what will he be looking for?

“With all breeds I’ll be looking for correctness in locomotion and balance in their conformation, as well as a real style and presence in the ring – they have to stand out from the rest.”

And he wants the public to understand why farmers show. “Showing remains a commercial endeavour,” he says. “It’s about gaining a reputation for producing and selling superior stock that can go on to produce the animals that supply us with quality meat and contribute to a balanced and nutritional diet.”

Poultry conference shows how to reduce antibiotic use