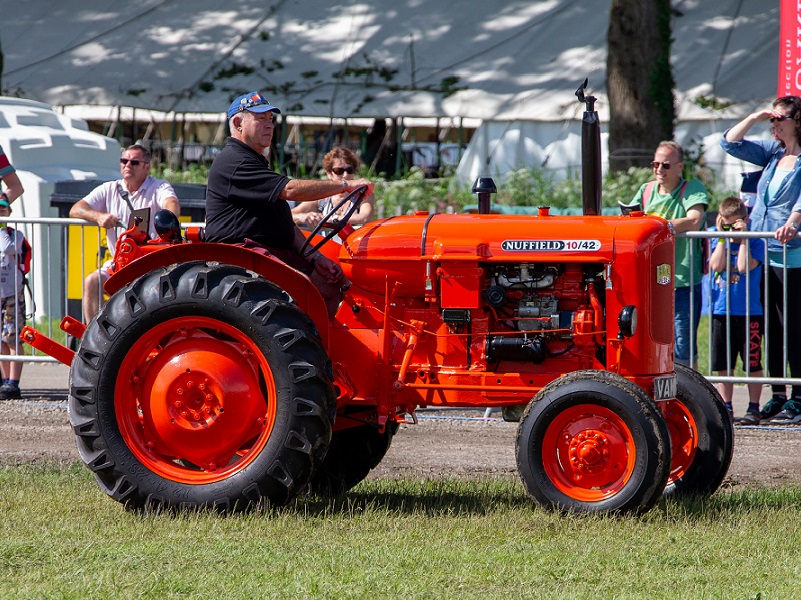 Over 100 meticulously restored vintage vehicles are making their way to the Royal Bath & West Showground for the much-loved exhibition and vintage tractor parade.

From the iconic liveries of the Little Grey Ferguson and John Deere to British legends David Brown and Leyland, a roaring 56 tractors will be showcasing the power of the past. The spectacular parade represents the decades from early engineering through to modern day models.

The evolution of the tractor is mind-bending, says enthusiast and long-standing steward of vintage vehicles, Tony Sugg. “There is no comparison between tractors of today and yesteryear; they look totally different. The early years of tractor engineering were very basic in principle, to replace the horse – it was revolutionary for farming at the time.”

Today, technology developments are the equivalent of the early transition from horse to horsepower. “It’s totally changed how we farm,” he says. “Technologies like GPS and automated steering are helping farmers farm more precisely; benefiting efficiencies as well as reducing farming’s impact on the environment.

“And safety is also much more of a focus of the modern machine.”

Paying homage to past and present, the parade starts in the 1930s with a pioneer; the Ferguson-Browne. “Ferguson was the first tractor manufacturer to develop hydraulics and three-point linkage,” says Mr Sugg. “It revolutionised farming – so much so that other major manufacturers tried to copy it, resulting in several large court cases.”

Moving into the 1940s, after Ferguson and Brown parted, the parade features a 1947 David Brown Cropmaster. “This particular tractor was abandoned on the Somerset Levels for 40 years. Fortunately, it wasn’t lost forever and was painstakingly rebuilt and restored to glory by its current owner.”

The 1950s era showcases some mechanical changes. “There will be a 1954 Fordson Major with a six-cylinder turbo diesel engine that was taken from a Ford Cargo lorry,” says Mr Sugg. “It’s a nice example of the change from petrol to diesel and how manufacturers were experimenting with bigger engines to meet the growing demands of farming.”

Massey Ferguson will certainly be recognisable in the ring as it represents the swinging sixties. “The 1964 Massey Ferguson 35X was more familiar with the runway than the farm track – it was sold new to the British Aircraft Company and used for snow ploughing,” he explains. “It shows how tractors have diversified in use across different industries.”

A British classic will be in the 1970s line-up; a 1979 Leyland 272 Synchro. “Displayed by Leyland at the 1979 Royal Smithfield Show, this tractor went on to be used in demos – it really was seen as a tractor of its time,” he adds. “It was also the decade that tractors began being fitted with cabs as standard.”

Nudging into the 1980s, the parade will include a Deutz DX92 – a model only in production for one year. “It wasn’t popular,” says Mr Sugg. “They were incredibly expensive so very difficult to sell.”

And a tractor parade would not be complete without a John Deere. “This is a 3650 model from 1990 that’s had a very thorough make over,” he says. “No doubt it’ll be popular as one of the most recognisable tractors in the parade.”

Stepping into the 21st century, a Valtra T155 finishing the line-up will highlight just how much tractors have evolved.

And tractors are just one vintage feature at the Royal Bath & West Show. “Tractors, commercial vehicles, barn and steam engines are all part of the vintage machinery showcase at the show,” says Mr Sugg.

“It’s diverse and people of all ages can enjoy the displays and parades, so I encourage visitors and enthusiasts to come and see the power of the past and join in the fun of the vintage fairground.”