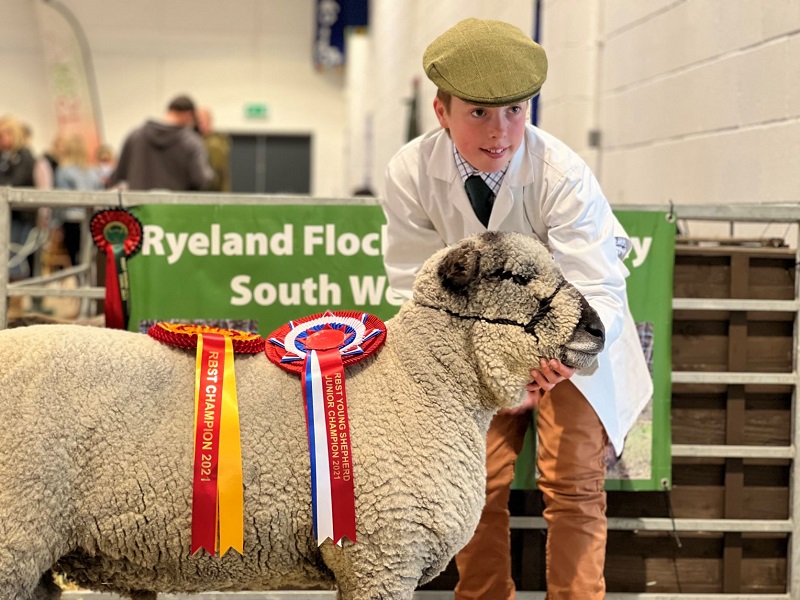 Livestock competitions are an integral part of the Royal Bath & West Show, with many exhibitors starting preparations months in advance. We catch up with Thomas Nash, recently crowned RBST Young Shepherd of the Year, to find out more.

Although Thomas is not from a farming family, it was the Bath & West which got him into keeping sheep. “We’ve always had farmers just a few fields away from us, who competed at the Show, and I always went to visit them,” he says.

“At first I wanted cows but my parents thought that was too much of a big step for me, so they bought me two Coloured Ryeland ewes for my birthday and I haven’t looked back.”

An avid visitor to the Bath & West Show, Thomas (now aged 12) first competed there in 2017. “But this year will be the first year with a full show team,” he says.

And of course, preparation is key. “There’s a lot of effort that goes into it, I spend weekends washing the show team, then one or two weeks before the event I’ll start getting them in and giving them their first trim,” he explains.

“I’ll be trying to get a nice flat back onto them – they should be nice and square.”

So what does he look for in his show stock? “With Coloured Ryelands there are certain breed characteristics I look for; they need white teardrops, white mealy markings and as with all other sheep, generally good conformation and head carriage.

“As Ryelands are a medium sized breed, I want them nice and stocky but not too leggy. For me I also like small ears and a small nose.”

Thomas has successfully built up his flock from two. “I now have 39 Coloured Ryelands, including lambs and one Ryeland,” he says. “Mum wasn’t very pleased when I came back from the breed show and sale with a white Ryeland but hopefully I’ll be able to show her and start another Ryeland flock alongside the Coloured flock.”

And his hard work paid off when he won the Rare Breed Survival Trust’s Young Shepherd of the Year award 2021. “It was similar to the other young handler classes; the judge looks at the way you handle the sheep, getting them to stand correctly and walk around.

“I was ecstatic when I won, it just makes all the time and effort worthwhile. Especially in the winter months or when you’re lambing at three o’clock in the morning – it definitely pays off when you win something like that.”

Win or lose, Thomas loves showing. “The atmosphere and the buzz is great; even if you don’t do well it’s still an enjoyable day and everyone I show with is like an extended family.”

So what’s his favourite part of the Show? “The thing I really enjoy, is at the end of the Show when most of the public have gone home, just walking around and enjoying it yourself – it doesn’t really get much better.”

And he’s looking forward to this year’s Show. “The Bath & West is a very prestigious event and the competition is strong,” says Thomas.

“I’ve been honing my skills for the past few years and hopefully this year it will pay off. It would be really great to win at the Bath and West, as it’s one of the biggest shows in Somerset – everyone knows about it – it would really put me on the map nationally for Coloured Ryelands.”

Try a new sport at the Bath & West Show