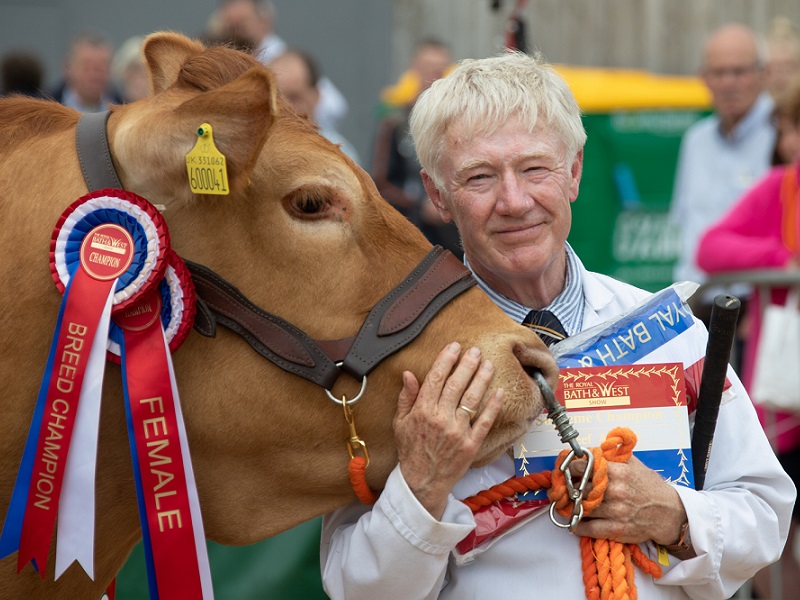 Celebration was in full supply as judges tapped out the cream of the crop at this year’s Royal Bath & West Show – and it was clear exhibitors were glad to be back.

“It’s unheard of – it’s usually between the Holstein and Jersey,” said Mr Sales. “So we’re all thrilled and it’s great for the breed to come to the fore.”

Now in her third lactation and yielding 32 litres/day, the supreme champion is homebred – out of show cow, Brymor Bijou 39, and sired by Pine Ridge Double L. “She’s performing really well at home and in the ring,” said Mr Sales. “She’s won and been placed at numerous shows including here as a calf in 2018, and in the same year, taking reserve champion at the All Breeds All Britain Show.”

For the Norman and Sales’ families this is a shared win. “I’ve been enjoying the show for the best part of 40 years,” said Mr Sales. “But this is mine and Richard’s first interbreed supreme champion at the Royal Bath & West Show; it means a lot to us and the whole team, next stop Royal Cornwall.”

Reserve champion was awarded to the senior cow Cancourt Peppermint 3 PI, a Brown Swiss from Lilylane Farms in Somerset. Now in calf, she will compete locally and at The Dairy Show in October.

Into Friday (3 June) and it was a big day for the interbreed championships across the four sections.

Scooping the supreme champion beef animal was Chris and Nicky White’s British Limousin cow, Frogmore Nicola. “It’s our first interbreed win at the Royal Bath & West Show,” said Mr White. “I grew up in Castle Cary so this feels like a home-coming and to win supreme champion at home is marvellous.”

Homebred in Morton-in-Marsh, Gloucestershire, at five and a half years old and 1,060kg, Nicola has produced two calves – Frogmore Rebecca and Frogmore Sophie – for the 40-strong Frogmore herd, with her third calf expected in August. And the supreme champion’s lineage is decorated, with her dam Frogmore Helen winning the acclaimed interbreed supreme champion at the Royal Welsh Show in 2015.

Meanwhile, in the sheep lines, the Devon-based Alford family took the supreme champion title when their Foxhill Charollais shearling ewe was tapped out under judge Brian Dallyn.

“She’s faultless in conformation and locomotion,” said Mr Dallyn. “There’s great length, quality in the backend and she’s sharp about the head – she paraded very well.”

Shown by Will Price, the shearling ewe preceded her interbreed victory with the taking of breed champion in the Charollais’ South West feature show, before going on to take interbreed continental champion. “We’re off to the Royal Cornwall next week, followed by the Royal Highland and the Royal Welsh,” said Mr Price. “It’s great to be back out at major summer shows again.”

Reserve spot was given to Matthew Gray and his partner Louise Crowther’s homebred Polled Dorset ram lamb, Buckenhill Escobar. “He has great scope and fantastic growth for his age,” said Mr Dallyn. “He’s a fantastic representation of the breed – just beaten over the line by the presence of the Charollais.”

Stepping into the ring with the ram lamb, Mr Gray was delighted with his Polled Dorset’s performance. “He’s done brilliantly – he took breed champion, then native interbreed champion and now reserve supreme champion,” he said. “It’s great to be back out and catching up with people; next we’re off to Three Counties Show and the Royal Welsh.”

In with the pigs and the line-up for interbreed supreme champion featured the rare British Lop pig and the lesser known Duroc, a breed originating from the USA.

To the delight of the Loveless family from Dorset, it was Hayley’s Duroc boar – Hazeway Thunder – which claimed top spot as interbreed supreme champion, pipping her father’s Large White boar, Portbredy King David, to the post. “I beat my dad – I’m really happy,” she said.

The August born boar was on his first time out. “I’m really pleased with him; I selected him because he’s got strong legs, good topline and underline – he’s got lots of power,” she explained. “We’re off to Royal Cornwall next week and then onto the Great Yorkshire Show.”